More than 10 years ago, in 2008, I had the honour to work as a law clerk for Albie Sachs. My work as a clerk was double. On the one hand, I worked with and for Albie in doing research for the book published in 2008, The strange alchemy of life and law with Oxford University Press. On the other hand, I did my regular work as a law clerk on the cases that were then pending. One idea is very central to the work I could then do, together with other law clerks, in Albie Sachs’ chamber: in French we would say, ‘de la confrontation des idées jaillit la lumière’. It’s the simple idea that by confronting ideas – by communicating, by debating, by being honest – you will get, not to an absolute truth but at least closer to an idea of justice and truth.

It was a real honour to work together with Albie Sachs during his very last term. In spite of the obvious hierarchical difference, he always asked the opinion of his colleagues and clerks. This was more than 10 years ago. So, I was even younger than I am now. This is just to show the respect Albie had, has and always will have for younger people and for different opinions. I think this is also the central idea of the book. Why? The book centers around the idea of dissenting and concurring opinion. In essence, this is of course a confrontation of ideas. But larger than this, the translation of this book is also about the dialogue between continents, between judges of various countries, and even between the Global South and the Global North. I’m mentioning the Global South first as in this book it is quite obvious that judges from the Global North – in this instance, Christine Schurmans – are learning from judges from the Global South – in this instance, Albie Sachs. This dialogue between judges about the very structure and symbolism of justice – going to the depth of what justice means – is relevant for all legal practitioners, including lawyers and judges but also, I would dare to say, diplomats and politicians. 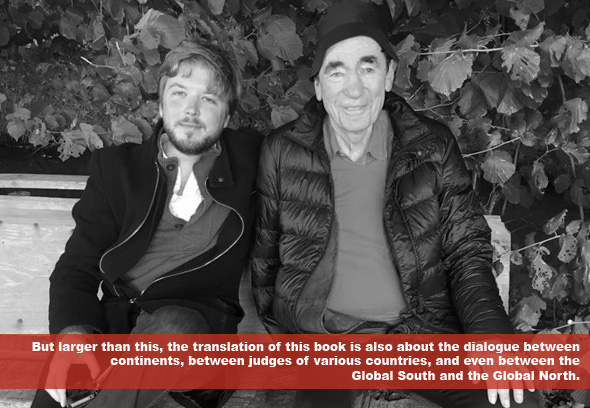 About the Author:
Emmanuel de Groof is an international lawyer with experience since 2006 in litigation, adjudication and decision-making resp. in (int’l) law, constitutional law, and multilateral diplomacy; 5-year academic research experience; and considerable experience in university management.