← Apartheid, gender and property relations in South Africa: Some reflections from Rahube v Rahube & Others
Tax treatment of gains on the sale of assets in the extractive sector in DRC: A much-needed mix of human rights, sustainable development and legal certainty →

The recent move to repeal Liberia’s Criminal Libel laws by the newly elected Government of former Liberian Football legend, George Manneh Weah, has been hailed by human rights groups as a positive step in the right direction. The effort to decriminalise section 11.11 of the Penal Law comes barely two months following the visit of the United Nations Special Rapporteur on Freedom of Expression to Liberia. The UN Officials called on the Government of Liberia to review all laws that undermine free speech, as guaranteed by article 19 of the International Covenant on Civil and Political Rights (ICCPR) and other instruments ratified by Liberia.

As a treaty obligation, Liberia is bound to uphold article 19 of the ICCPR, which guarantees freedom of expression through the right to seek, receive and impart information.  The UN Human Rights Committee has expounded on this rights by enjoining State parties to ensure that the rights contained in article 19 of the Covenant are given effect to in the domestic law of Member States.  The Committee, elaborating further on article 2 of the ICCPR, on States’ obligation under the Covenant, avers that basic rights of the human person are erga omnes obligations. The African Commission in the Declaration of Principles on Freedom of Expression in Africa, asserts that ‘sanctions should never be so severe as to interfere with the exercise of the right to freedom of expression.’ Liberia’s recent efforts to decriminalise free speech are therefore, in line with the 1986 Constitution of Liberia as well as its treaty obligations. The rights guaranteed in the Constitution encompasses the right to hold opinions without interference as well as the right to impart knowledge and freedom of speech. 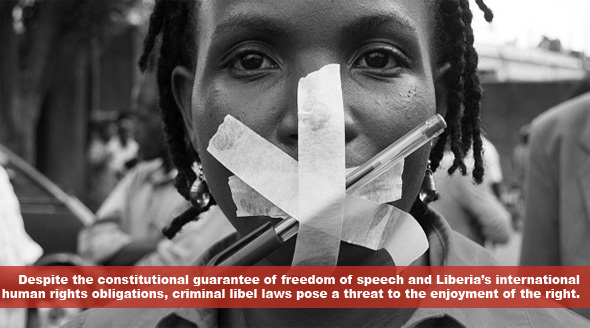 Despite the constitutional guarantee of freedom of speech and Liberia’s international human rights obligations, criminal libel laws pose a threat to the enjoyment of the right. For instances, section 11.11 of the 1978 Penal Law of Liberia, states that there is Criminal Libel against the President, when:

A person exposes to the public any writing or makes any public broadcast, in which he has accused the incumbent President of the Republic of Liberia of conduct which constitutes the commission of a crime, provided, (a). The conduct charged is untrue and the author knows it to be untrue, and (b). The purpose of the actor is thereby intended to injure the President in his reputation

This section has been used by successive Governments to stifle freedom of expression and has caused widespread self-censorship by media institutions. Against this backdrop, and considering her long years of advocacy and being a victim of these draconian laws, former President Ellen Johnson Sirleaf, became the second African President after Nigerien President Mahamadou Issoufou, to have signed the Table Mountain Declaration, which calls for the repeal of criminal defamation and insult laws across Africa. The decision to sign the Declaration should have been followed by concrete actions to swiftly amend this criminal libel legislation. While other meaningful and concrete efforts were made to enact the Freedom of Information Act, the Penal Law and other laws such as the criminal libel against the President, sedition, and mercenarism remain unchanged and used to continue in various ways, to stifle free speech and free press. For example, individuals who claim damages for civil defamation against media institutions covertly get support from the government. The reason being that media houses that unable to pay the usually mammoth damages imposed, are compelled to close down. This is unfortunately, a very effective, and yet legal method to silence the free press.  A vivid case involved the editor of the FrontPage newspaper, Rodney Sieh who was found liable in a civil libel lawsuit in 2013 after he accused the Minister of Agriculture of siphoning millions of dollars intended to fight againstearthworm disease. Sieh was ordered to pay US$1.5 million dollars in damages. After a default payment, Sieh suffered a prison term. In a similar case, in 2009, a lawsuit was filed by President  Sirleaf’s office for $5 million in damages against the Newbroom Newspaper which led to the paper’s closure. In other instances, registration of media institutions were made burdensome either because of a cumbersome process or because of the imposition of huge fees to obtain a frequency for radio stations.

Considering these developments, fear still lingers whether President Weah will not thread the same path despite his call to decriminalise all criminal libel laws. These fears find justification in President Weah’s recent description of his critics, including media institutions as ‘enemies of the state’. The statement follows concerns that he received gifts from a Burkinabe Businessman in exchange for a construction contract.  Gifts under this circumstance violates Section 9.1 of the Code of Conduct of public officials, which expressly prohibits public officials and employees of Government from receiving or encouraging the giving of any bribe or casual gift in connection with the performance of their official duties. In a similar case, a Facebook comment by one Abraham Kamara allegedly calling for the assassination of the president, received a robust response from the office of the National Security Advisor, including a threat to deal decisively with anyone abroad and home who seeks to undermine the government.

In addition, on 18 June 2018 the Ministry of Information canceled licenses issued to all media institutions from 1 January 2018 until that date.  According to the statement, the move was intended to correct anomalies in the media regulatory processes. Whether this decision was taken in good faith to ensure media institutions comply with the State’s regulation or was just another attempt to impede the work of the free press remains to be seen.

To accelerate the efforts at decriminalising criminal defamation laws, concerted efforts to revisit civil defamation suit especially those brought to Court by public officials cannot be overemphasised. The African Court on Human and Peoples’ Rights in Konate v. Burkina Faso, stated that ‘people who assume highly public roles must necessarily face higher criticism than ordinary citizens; otherwise public debate may be stifled altogether.’ Prior to the Konate case, the US Supreme Court in New York Times Co. v. Sullivan (1964)  stated clearly that the standard of proof for defamation suits brought by a public official should be higher than the preponderance of evidence standard applicable to every element of defamation and civil lawsuit generally.’ In addition to this, it is imperative to amend Section 44.7 (e) of the Civil Procedure Law, which allows a prison sentence in a civil defamation suit if the defendant fails or is unable to pay damages in order to liquidate the full amount of the judgment, interest and cost at the rate of 25 million dollars per month. At this rate, a judgment debtor in a damage suit of 1 million dollars could spend four thousand years in prison to liquidate the said amount. Maintaining prison sentences for both criminal and civil defamation abdicates Liberia commitment to its human rights obligations. The UN Human Rights Committee has aptly cautioned state parties  to avoid excessively punitive measures and penalties; and even where the defendant is required to pay cost, there should be a reasonable limit for reimbursement to the party that won.’

There is clearly an understandable apprehension within the fourth estate as to whether Weah is sincere to uphold Article 66 (2) (c ) of the Revised ECOWAS Treaty of 1993 which calls on State Parties ‘to ensure the respect for the rights of journalism’ ; or is just buying time to reverse the relative level of free expression at this moment. Time will tell!

About the Author:
Urias Teh Pour holds a Bachelor of Science (Economics) from the University of Liberia, Bachelor of Laws (LLB) Louis Arthur Grimes School of Law, University of Liberia and an LLM degree in Human Rights and Democratisation in Africa from the Centre for Human Rights, Faculty of Law, University of Pretoria. He has worked as Human Rights Officer for the United Nations Mission in Liberia; Legal Advisor to the Carter Center Access to Justice Project and currently Legal Advisor on the Liberia Law Society Land Rights and Freedom of Expression Projects.

2 Comments on “Freedom of expression: Hopes, anxieties and skepticism in Liberia’s nascent democracy”