← The right to happiness in Africa
The conviction of Hissène Habré by the Extraordinary African Chambers in the Senegalese Courts: Bringing justice in cases of serious human rights violations in Africa →

Economic, Social and Cultural Rights under the 1999 Constitution of the Federal Republic of Nigeria and the enforceability problem

The 1999 Constitution of the Federal Republic of Nigeria (hereinafter referred to as the “Constitution”) provides for economic, social and cultural rights in rather grand and lofty terms in form of the Fundamental Objectives and Directive Principles of State Policy in Chapter II of the Constitution. These rights are however denied enforceability under the Constitution as it prefers to see them as goals and objectives which the Government is to strive to attain. This denial of enforceability of these rights contained in this Chapter of the Constitution poses a major problem to human rights activism in the Country, as the specific rights contained in that Chapter of the Constitution are worthy of enforcement in this age and time. Some of those rights include; cultural, labour, economic, political, environmental and educational rights. It therefore comes, now and again, to the fore that some of these rights are not being enforced in the country. This article attempts to analyse the enforceability problem and address some strategies for enforcement. 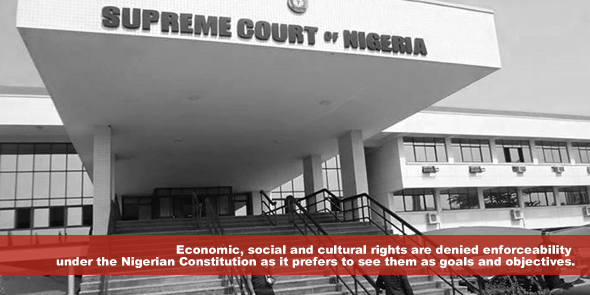 The Nigerian Courts have however artfully devised strategies for enforcement without breaching express constitutional provisions. The most interesting strategy is that adopted by the Court in Archbishop Okogie v. Attorney General of Lagos State (1981) 2 NCLR 625 HC with respect to educational rights in the Constitution. The Court recognized the enforceability problem of all rights contained in Chapter II of the Constitution and goes on to state that by virtue of Section 13 of the Constitution, it shall be the duty and responsibility of all organs of government and of all the authorities and persons, exercising legislative, executive or judicial powers, to conform to, observe and apply the provisions of Chapter II of the Constitution. The effect of that provision is that without prejudice to Section 6(6)(c) of the Constitution, the Government still has the duty to observe and apply the Economic, Social and Cultural rights in the Constitution. The Court in that case, recommended legislation as a way of giving life to those rights. i.e. the rights can be legislated upon thus making them enforceable. This strategy was further explained and elucidated upon in the case of Attorney General of Ondo State v. Attorney General of the Federation (2002) 27 WRN 1 SC where the Supreme Court stated that the Federal Government and State Government have legislative powers over some matters spelt out in Chapter II and thus have constitutional powers to make them enforceable by Legislation. See also; Bamidele Aturu v. Minister of Petroleum Resources and Others.

Environmental rights seem to be the most actively litigated economic, social and cultural right in Nigeria. Thus, by virtue of the decision in Jonah Gbemre v. Shell Petroleum Development Company (2005) AHRLR 151 (NgHC 2005) environmental rights, and by extension all rights in Chapter II can be made enforceable by the liberal interpretation of the fundamental rights contained in Chapter IV of the Constitution. The express denial of enforceability can therefore be bypassed by adopting these strategies.

3 Comments on “Economic, Social and Cultural Rights under the 1999 Constitution of the Federal Republic of Nigeria and the enforceability problem”