← The conviction of Hissène Habré by the Extraordinary African Chambers in the Senegalese Courts: Bringing justice in cases of serious human rights violations in Africa
Why has the EU’s Temporary Protection Directive not been applied during the migration crisis in order to receive Syrians and other asylum seekers? →

The tragic dialectic between happiness and apartheid

Some political speeches announce tragedies. In South Africa, the tragedy was announced during a radio broadcast on 17 March 1961, when the people heard the following statement: “The policy of separate development is designed for happiness, security, and stability (…) for the Bantu as well as the whites”. It was the first phrase proclaimed by the Prime Minister of the Union of South Africa, Hendrik Verwoerd, in his Address to the Nation. The policy of separate development would prove to be a scandalous euphemism. Verwoerd continued to promise that “we shall provide all our races with happiness and prosperity”.[1] Verwoerd would become known as “the architect of apartheid”.

The South African Governor-General was Supreme Chief in the Transvaal up until 1956. At that time, Cape Africans were considered too advanced to be treated as an underclass. Elizabeth Landis, an American expert on Southern Africa affairs, explains that the government had to change this consideration, with the explanation that ‘if we want to bring peace and happiness to the Native population (…) then we cannot do otherwise than to apply this principle which has worked so effectively in the other three provinces, to the Native population of the Cape as well (…)”.[2] Happiness therefore becomes a scapegoat.

Separating citizens according to the skin color is a shameful economic policy, regardless of the promised happiness. The arrest of an innocent man must not be tolerated, even if the prisoner claims to be happy with the jail. Immoral practices, such as slavery, cannot be justified under the argument that the majority feels comfortable with such a disgrace. There are values other than happiness which refute certain decisions, irrespective of their effects on the feelings of the affected persons.[3]

In this regard, Steve Biko noted that apartheid constitutes a form of “sadism”. While this term is generally used with reference to sexual conduct, Biko interpreted it in terms of the relationship between the state and its citizens. This interpretation is applicable because apartheid was not a form of individualist sadism, but an institutionalized set of sadistic practices imposed by the figure of the state, its organs, and authorities.

Biko develops this argument through the example of the author, Barnett Potter, who took pleasure in blaming the black communities for the alien economic exploitation which they suffered. Biko explains that “we can listen to the Barnett Potters concluding with apparent glee and with a sense of sadistic triumph that the fault with the black man is to be found in his genes (…)”.[4]

Potter’s argument had been that black individuals deserve their unhappiness and their struggles because they do not contribute to the sum of human happiness. Potter referred to the black community as follows: “They stay alive thanks to grants-in-aid, loans and various forms of subvention, but they contribute little, if anything, to the sum of human happiness and welfare and less to the total of human knowledge and goodness. They are the burden of our time”.[5]

There is no right to sadistic pleasures when the people are affected by institutionalized practices of discrimination, directly or indirectly. If happiness is correctly interpreted, it becomes a value that encompasses a strong commitment to the realization of other values, such as democracy, freedom, objective well-being, subjective well-being, and human dignity. Happiness should not, and cannot be used as the justification of shame-based prejudice and cruelty, regardless of the apartheid regime’s attempt to do so.

The use of happiness to deny basic human rights may be explained in terms of the Plessy v. Ferguson case, which was heard by the US Supreme Court.[6] In this instance, James Walker stated that: “the real evil lies not in the colour of the skin but in the relation the coloured person sustains to the white. If he is a dependent, it may be endured: if he is not, his presence is insufferable”. Furthermore, “instead of being intended to promote the general comfort and moral well-being, this act is plainly and evidently intended to promote the happiness of one class by asserting its supremacy and the inferiority of another class”.[7] This is not happiness; it is the infliction of misery fabricated by a sense of superiority that intentionally inflicts pain on others.

Walker’s argument coincides with Biko’s, inasmuch as “while we progressively lose ourselves in a world of colourlessness and amorphous common humanity”, the heads of apartheid and those who enjoy the advantages of an unfair system “are deriving pleasure and security”.[8]

The Constitution of South Africa built a barrier trying to minimize the inevitable presence of pain in people’s life, as well as to avoid the exhortation of sadistic pleasures as being a natural part of happiness. The National Anthem urges that South Africans “stop wars and tribulations”. This recognition is emphasized by the preamble to the Constitution which states that “we, the people of South Africa, recognize the injustices of our past; honour those who suffered for justice and freedom in our land (…)”.

The Constitution habours concern about suffering, and challenges different forms of sadistic pleasures. Section 1 founds the values of the Republic of South Africa, including “non-racialism and non-sexism”. Section 6(2) recognizes the historically diminished use and status of the indigenous languages of the South African people. Section 9 disciplines commitments in terms of “equality”, highlighting unfair discrimination in the areas of race, gender, sex, pregnancy, marital status, ethnic or social origin, colour, sexual orientation, age, disability, religion, conscience, belief, culture, language, and birth.

With regard to the children, for instance, section 28(1)(d) states that every child has the right to be protected from maltreatment, neglect, abuse, or degradation.

Even the oath of President and acting President brings a duty of protecting people against any form of pain. “I solemnly and sincerely promise that I will always promote all that will advance the Republic, and oppose all that may harm it”.

Section 198(a) states that National security must reflect the resolve of South Africans, as individuals and as a nation, “to be free from fear and want and to seek a better life”.

The human dignity principle is able to establish a boundary against any excess derived from the misuse of the right to happiness. It is a belief in the human being’s capability of being content. Biko affirms “I’ve got no doubt in my mind that people – and I know people in terms of my own background, where I stay – are not necessarily revengeful, nor are they sadistic in outlook”.[9]

We believe in the inherent goodness of man. We enjoy man for himself. We regard our living together not as an unfortunate mishap warranting endless competition among us but as a deliberate act of God to make us a community of brothers and sisters jointly involved in the quest for a composite answer to the varied problems of life. Hence in all we do we always place Man first and hence all our action is usually joint community oriented action rather than the individualism which is the hallmark of the capitalism approach. We always refrain from using people as stepping stones. Instead we are prepared to have a much slower progress in an effort to make sure that all of us are marching to the same tune.[10]

Section 1(a) of the Constitution establishes the fundamental values of the Republic of South Africa, including “human dignity”. Section 7(1) reaffirms the democratic value of human dignity. Section 10 proclaims that everyone has inherent dignity, and the right to have their dignity respected and protected. Section 35(2)(e) states that everyone who is detained has the right to conditions of detention that are consistent with human dignity. Section 39(1)(a) assures that when interpreting the Bill of Rights, a court, tribunal, or forum must promote the values that underlie an open and democratic society based on human dignity, equality, and freedom.

Human dignity is the constitutional vector that prevents the right to happiness from converting itself into grounds for cruel practices, based on sadistic pleasures, which, instead of enhancing civilizing expeditions, destabilizes constitutional conquests. 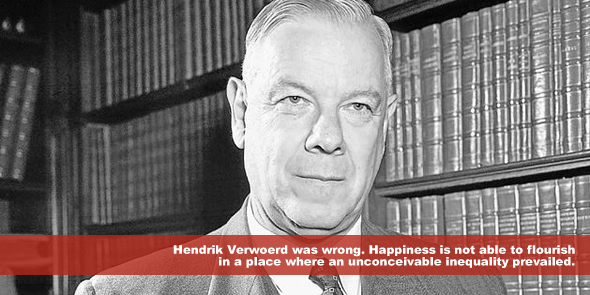 Hendrik Verwoerd was wrong. Happiness is not able to flourish in a land without popular participation; in a soil where freedom was just a remote idea; in a place where an unconceivable inequality prevailed; where there was no regard for subjective well-being; where an institutionalized brutality eroded any sense of human dignity.

It is a question of principle. Steve Biko correctly stated that “apartheid – both petty and grand – is obviously evil”.[11] There is no happiness under the oppression of one over another, regardless of skin colour. The prohibition to sadistic pleasures is a fundamental dimension of the right to happiness.

This dimension may be interpreted to be the foundation of the causes and values enshrined in the South African Constitution, which is designed to remind future generations of South Africans of the pitfalls of the sense of superiority, prejudice, and disregard of others’ pain as a means of dominance.

This is the fifth article in a series by Saul Leal.

[1] HF Verwoerd “The truth about South Africa” Address by the Honourable Prime Minister of the Union of South Africa, Dr Verwoerd before the South Africa Club in the Savoy Hotel (London, 17 March 1961).

[3] D Bok The politics of happiness: what government can learn from the new research on wellbeing (Princeton, 2010) at 56.

3 Comments on “The tragic dialectic between happiness and apartheid”