← The imminent mass exodus from the ICC by African member states: A turning point for justice in Africa?
Challenging anti-terrorism laws in Swaziland: When the judiciary becomes the stumbling block →

Happiness as constitutional empowerment in Nigeria

In Nigeria, happiness is understood as a Constitutional right and is more than a mere linguistic expression. Section 16(1)(b) of the Constitution provides that ‘the State shall, within the context of the ideals and objectives for which provisions are made in this Constitution, control the national economy in such a manner as to secure the maximum welfare, freedom and “happiness” of every citizen on the basis of social justice and equality of status and opportunity’. Nigeria thus constitutionalized happiness as part as its movement toward to a sustainable economy. This prevents the interference of economy with the people’s happiness.[1]

Nigeria shows how commitment to peoples’ happiness is able to diminish the strength of money in areas which must not be sold, thus emphasizing that there are things that money cannot buy. The African collective trauma caused by the intense economic exploitation conducted by the colonial system shows its value by inserting limitative factor into a constitutional provision in order to face the eventual side effects of unlimited economic power. The Nigerian government’s decision to deregulate the pricing of petroleum, the nation’s most valuable asset, ended up in court in a case which reached landmark status.

Akinola Akintayo contextualises this through explaining that ‘oil occupies a prominent place in the socio-economic well-being of Nigeria and Nigerians. In 2010, oil resources contributed about 99% of government revenues and about 38.8% of the country’s GDP’. According to Akintayo, ‘while governments have always tried to maximize revenue through incessant increases in the price of petroleum products, individuals and civil-society groups have always resisted because of the prejudicial impact on the majority of the people, who are poor’. He explains that there is a challenge because ‘constitutional politics/litigation has become one of the means of resistance’. [2]

The Constitution of Nigeria has overcome the heavy burden of racism, colonialism, and all forms of oppression through the insertion of a specific provision determining that the economic power has to have a higher purpose, and this was achieved through attributing normative strength to this provision. The Nigerian constitutionalization of happiness is the realization of Biko’s intention ‘to reduce the materialistic element that is only creeping into the African character’.[3]

In Nigeria, Justice M. Bello[4] declared the policy of deregulation of the downstream sector of Nigeria’s petroleum industry to be unconstitutional, illegal, null and void, and ordered the government to fix and regularly publish the prices of petroleum products. The Justice ordered the defendants, their agents, collaborators, and whosoever to desist from deregulating the downstream sector of the petroleum industry and to fix the prices of petroleum products as mandatorily required by the Petroleum Act and the Price Control Act.[5]

As Akinola Akintayo emphasizes, the Court held that the combined reading of the aforementioned provisions ‘obliged the government to regulate and fix, from time to time, the price of petroleum products in such a manner as to secure the maximum welfare, freedom, and happiness of Nigerian citizens’.[6]

Bamidele Aturu, by believing in the rule of law in alliance with his Constitution, empowered many vulnerable groups whose lives depend on the most relevant national wealth. He led this legal battle between ‘David and Goliath’. This landmark battle shows Aturu to have taken a similar path to Biko, who stated that ‘the corner-stone of society is man himself – not just his welfare, not his material well-being but just man himself with all his ramifications’.[7] Biko explained that ‘we need to take another look at how best to use our economic power, little as it may seem to be’;[8] and, in Nigeria, happiness worked as a crucial tool to the achievement of Biko’s vision.

Femi Aborisade spoke at the tribute ceremony entitled ‘Bamidele Aturu: We Shall Not Forget You!’ held on 22 July 2014 in Lagos. Aborisade stated that ‘humanity has lost one of its rare assets. The tribe of radical forces on an international scale has been depleted in a fundamental proportion by the death of Bamidele Aturu’. Bamidele Aturu believed in the Constitution of his country and, by using it, opened a pathway of hope to the rule of law in Nigeria. He used happiness as a Constitutional right. 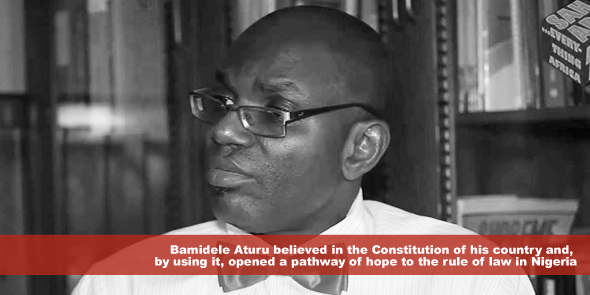 Constitutional rights have a prominent role in society’s pursuit of happiness, because they ensure unalienable good to all, including minorities. For Greene this exemplifies the fact that the utilitarian ideal is impartial and clearly beneficial to all groups.[9]

It is important to note that happiness is not solely a consequence of pockets full of money. Although money is a way to achieve dreams and legitimate projects, after a time, a paradox assumes its place. Richard Easterlin explains this paradox, named ‘Easterlin’s Paradox’, as follows: money aids the pursuit of happiness up to a certain point. After that, the level of happiness does not show significant increase.[10] This Paradox does not mean that the people should be denied their material goals, because interfering with peoples’ projects of happiness is an undue act. What Easterlin’s Paradox shows is that there is an interface between economic development and peoples’ happiness. As a result an absolute focus on material enrichment is not able to mirror a constant increase of long-term happiness. It is for this reason that the parallel development of the subjective aspects of well-being are of paramount importance.

The Nigerian case shows that, sometimes, hard cases introduce hard questions which can only be addressed and answered through a utilitarian approach. The implementation of this approach has the potential to have a long-term, positive effect on people’s lives. The questions remain, however, whether this policy is sustainable, and whether this policy presents the best manner in which to reach the greatest happiness?

It was not only Steve Biko’s ideal that was achieved by the Aturu case. By utilizing happiness as grounds of its decision[11], the case managed to put into practice Frantz Fanon’s ideal inasmuch as the purpose of life is ‘the pursuit of what is most innermost of humanity – our human potential – which capitalism has alienated us from’. [12]

It would not be an overstatement to say that the Nigerian decision represents a breakthrough in terms of the protection of a vulnerable group of people, namely the poor.[13] Courts contribute to maximizing society’s happiness by ensuring the exercise of fundamental rights. In this sense, it is irrelevant whether the courts use happiness as the grounds for the decision. Courts, once independent, become the last bastions of protection to vulnerable groups.

This is the fourth article in a series by Saul Leal.

[2] Akintayo ‘Case Review: A Good Thing from Nazareth? Stemming the Tide of Neo-Liberalism against Socio-Economic Rights: Lessons from the Nigerian Case of Bamidele Aturu v. Minister of Petroleum Resources and Others’ (2014) 15 Economic and Social Rights Review 7.

[5] The violations challenged the following provisions: section 6 of the Petroleum Act, 2004; section 4 of the Price Control Act, 2004; and Section 16(1)(b) of the Constitution of the Federal Republic of Nigeria, 1999, which provides that ‘the Government shall control the national economy in such manner as to secure the maximum welfare, freedom, and happiness of every citizen on the basis of social justice and equality of status and opportunity’.

[6]Akintayo ‘Case Review: A Good Thing from Nazareth? Stemming the Tide of Neo-Liberalism against Socio-Economic Rights: Lessons from the Nigerian Case of Bamidele Aturu v. Minister of Petroleum Resources and Others’ (2014) 15 Economic and Social Rights Review 7.

[11] Akintayo (n 43) 07. An appeal against this decision is pending before the Court of Appeal. Akintayo highlights that the Court, relying on the Nigerian Supreme Court’s decision in the Attorney General of Ondo State v. Attorney General of the Federation (2002) 9 NWLR (Pt. 772) 222, held that the provisions of chapter II of the Constitution were made justiciable via legislation.

[13] Eboe-Osuji ’18 October 2013’ (2013) ICC-01/09-02/11 10. There are more precedents invoking happiness: in a separate opinion presented in 2013, judge Eboe-Osuji, of the International Criminal Court, declared: ‘(…) an ICC that is strong in its mandate ensures obviously the bona fide interests of Africa, both as a berth for humanity in its essence and as a place in which the human being should pursue “happiness” and potentials in the fullest measure’.

5 Comments on “Happiness as constitutional empowerment in Nigeria”