← Reacting to the growing attitude of African leaders in using politics as an engine to flout judicial authorities
Extraction and right to food in Mozambique: Empty promises to empty plates →

The city is the new refugee camp…
~ International Rescue Committee

Article 1 of the 1951 United Nations (UN) Convention relating to the Status of Refugees (1951 Convention) defines refugee as ‘a person who is outside his or her country of nationality or habitual residence due to a well-founded fear of persecution base on race, religion, nationality, membership of a particular social group or political opinion and is unable or unwilling to avail him or herself of the protection of that country or to return there for fear of persecution’. Due to contextual issues, article 1 of the 1969 Organisation for African Unity’s Convention Governing the Specific Aspects of Refugee Problems in Africa (1969 OAU Convention) added a second paragraph to the 1951 Convention to incorporate people that have been displaced due to liberation wars and internal upheavals.

Meanwhile, there is no internationally recognised definition for urban refugees. However, the Refugee Consortium of Kenya (RCK) defines an urban refugee as a refugee who satisfies the international requirements for obtaining a refugee status and has self-settled in a city or town. Recent decades have experienced rapid population growth with most cities witnessing urban sprawl. The United Nations High Commissioner for Refugees (UNHCR) reported in 2009 that an estimated 58 percent of the world’s 10.5 million refugees now reside in cities.

Despite it being mostly rural region, UN Habit has projected that Sub-Saharan Africa and for that matter countries in Eastern Africa will have more than half of its population residing in urban areas by 2026. Characteristically, there has been increasing flow of refugees to urban areas in this region too. According to official UNHCR 2015 statistics, four Eastern African countries (Kenya, Uganda, Tanzania and Ethiopia) host more than 1.5 million refugees. These refugees are mostly from 9 countries (Somalia, South Sudan, Sudan, Uganda, Ethiopia, Eritrea, Rwanda, Burundi and DR Congo). 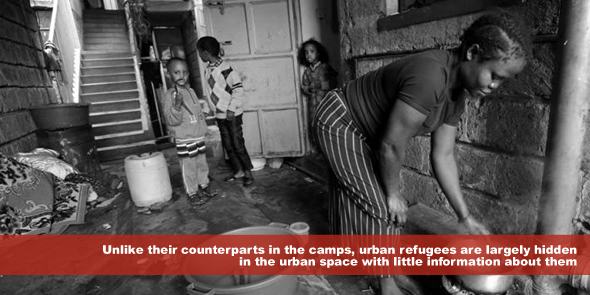 A joint UNHCR and United States Department of State report in 2012 observes that there are more than 46 300 refugees in Nairobi (Kenya) and little more than 40 000 refugees in Kampala (Uganda) even though unofficial reports pegged figures in each of the two cities a little more than 100 000. Effectively responding to this situation requires policy awareness on how inclusive urban planning through improved rights and protection for refugees (enhanced access to adequate services and space) can build an enabling environment that maximise the skills, resources and creativity of refugees to drive sustainable development in host countries. This has become necessary because most states in the sub-region lack enabling national policy instruments that allows freedom of movement and the right to work in accordance with their international obligations.

Unlike their counterparts in the camps, urban refugees are largely hidden in the urban space with little information about them. These refugees migrate to the urban areas in pursuit of security, prosperity and self-reliance. However, what they encounter is disappointment through frequent harassment, physical abuse and abject poverty. This is because they often have few assets, limited support networks and constraints such as legal, cultural and linguistic barriers. In addition, ignorance of their rights and how to uphold them as well as fear of being exposed and past experience with public officials like the Police and Immigration officers make them reluctant in seeking institutional redress when their rights have been violated.

Arguably, relations between urban refugees and host communities depend on the context. A 2010 study by the Refugee Consortium of Kenya revealed that some refugees enjoyed excellent relations while others experience discrimination and hostility. The study contends that Kenyans have mixed feelings about refugees in general and Somalis in particular due to the perception that they are threat to national security. Despite their apparent linguistic, cultural and physical similarities, many refugees from the Great Lakes region reported facing discrimination, hostility and physical assault in Kenya and Uganda. Similarly, other refugees in the region experience hostile relations with local residents due to widespread perception among locals that refugees should remain among the poorest strata of society and not have access to the same level of services and economic opportunities.

Offering guidelines, the UNHCR released its Policy on Alternatives to Camps in 2014. This policy advocates for a paradigm shift away from the conventional camp-based management of refugees. It seeks to create enormous opportunities for refugees to live lawfully, peacefully and safely in host communities with the ability to self-integrate, taking responsibility of their own lives. It seeks to achieve this by empowering refugees, creating and strengthening institutional synergies between international, regional, national and local actors in delivering services to refugees no matter their location.

To give effect to this guideline and other international commitments, East African states must adopt practical policy mechanisms that offer durable solutions to the challenges faced by urban refugees. Also, the UN and the AU agencies together with civil society organisations must provide financial, logistics, technical and data support to states in offering socio-legal protection to urban refugees. Moreover, urban development and refugee resettlement concerns should not be addressed in an ad hoc fashion but should be integrated into municipal development plans. Therefore, metropolitan and municipal departments must work together with refugee organisations to integrate refugee issues into medium and long term urban development plans to facilitate holistic sustainable development.

Studies have confirmed that refugees generate new demand for goods and services which contribute to economic growth. Based on this, refugees can become key players in urban development, resilience and sustainability. In harnessing this, policy makers must recognise that refugees when managed well contribute to the resilience of communities and societies. Moreover, such plans must include capacity building and attitudinal change campaigns for state agencies that work directly with refugees to offer a greater protection to refugees in general and urban refugees in particular. This will improve the well-being of urban refugees as well as contribute to the socio-economic growth in the region.

About the Authors:
Michael Addaney is a Corporate Member of the Ghana Institute of Planners (Social Policy option) and a candidate of MPhil in Human Rights and Democratisation in Africa at the Centre for Human Rights, University of Pretoria in South Africa.
Gertrude Mafoa Quan is a Ghanaian by birth and a South African citizen. She holds a Bachelor of Arts in French and an LLB from Rhodes University. She is currently serving her articles at Meyer and Partners Attorneys (a firm of attorneys based in Centurion,) where she works as a candidate attorney. Gertrude is also studying for her master’s degree in Human Rights Law at the University of Pretoria. She is an aspiring human rights lawyer.