← Stop the human rights violations in the South-west and North-west regions of Cameroon now: A call on all relevant stakeholders
Promoting and protecting children’s rights in Africa: Case of the Talibés of Senegal. →

The status of the rights of persons with disabilities in Sierra Leone: The need for a paradigm shift from political lip service

Whenever one speaks of persons with disabilities (such as the visually impaired, the hearing and speech impaired, the mentally and physically impaired) in Sierra Leone the next thing that comes to mind is an idea of destitute Sierra Leoneans begging in the streets of Freetown and other areas in the provinces. Such a national image regarding persons with disabilities is clearly not in line with Sierra Leone’s legal obligation under national and international laws.

The reality in modern day human rights and democratic dispensation is the fact that persons with disabilities (PWDs) occupy a special position in every society in the world and this is not just because they are one of the vulnerable groups in society but also because certain rights are specifically accorded to them under both international and national laws. Unlike what used to obtain in the days of old, the present international human rights and democratic regime has adopted the social and human rights approach in dealing with issues affecting the rights of PWDs. This social model acknowledges that disability is a societal construct and assesses the socio-economic environment and the impact that barriers have on the full participation, inclusion and acceptance of persons with disabilities as part of mainstream society. This social paradigm is predicated on the idea that each human being is uniquely talented and PWDs can also make meaningful contributions to national development. Indeed Sierra Leone has made certain strides in addressing the rights of PWDs as could be seen in the ratification of the Convention on the Rights of Persons with Disabilities (CRPD) in 2010, the enactment of the Persons with Disability Act No. 3 of 2011, the establishment of the Commission for Persons with Disabilities in 2012 pursuant to the Persons with Disabilities Act No. 3 of 2011, and the institutionalisation of free education for PWDs at tertiary level. However, as impressive as these achievements may be, they are merely little drops in a mighty ocean.

For far too long in Sierra Leone disability right issues have been swept under the carpet and relegated to the back stage by political lip-service. Protecting and promoting the rights of PWDs is not just about enacting legislation or creating a commission; rather it is about creating a free and just society that is inclusive of all PWDs as equal citizens. Such free and just society can only be created in Sierra Leone when the Government and other state actors begin to do things differently by ensuring the holistic implementation of the Persons with Disabilities Act 2011 and also establishing the necessary social and environmental platform for inclusive education and the enjoyment of equal opportunities. South Africa, for example, does not have a separate legislation for PWDs but the rights of PWDs are being fulfilled and promoted by their Government’s willingness to ensure progressive realisation backed by the legal protection of these rights by the Constitutional Court. In Ghana, the Government has mainstreamed PWDs into the National Social Protection Strategy and Poverty Reduction Interventions to enable them to develop their full potentials and participate in Ghana’s national development process. These are being supported by policies, programmes and strategies that facilitate the holistic implementation of provisions in Ghana’s Persons with Disability law and the Convention on the Rights of Persons with Disabilities. Environmental and assistive measures, including providing ramps and lifts on public buildings, reading materials in accessible format with the help of the Braille translation centre of the Ghana Blind Union, are also being actualised. In Kenya, the National Council for Persons with Disabilities is also in the active business of mainstreaming PWDs into the national economy and also creating the enabling environment in which PWDs can operate effectively and efficiently. 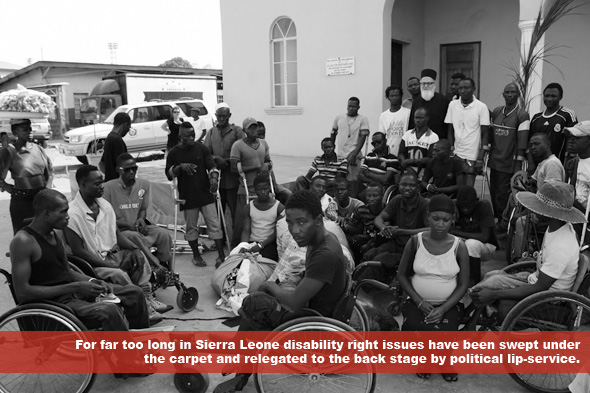 In Sierra Leone on the other hand, we have a situation where the National Commission for Persons with Disabilities is hugely understaffed and most of the major provisions in the Persons with Disabilities Act No 3 of 2011 have not been implemented since its enactment more than six years ago. The previous government was in power for ten years and yet was unable to ensure the holistic implementation of this Act. I will not probe into the reason for the previous government’s neglect or failure to ensure the full protection of the rights of PWDs through the implantation of the Act. What is, however, clear is that their neglect or failure to holistically implement the Act speaks volume of the fact that they had very little regard for the rights of PWDs under national and international laws especially the CRPD, which was ratified by Sierra Leone on 4th October 2010. One of the major provisions of the Persons with Disability Act No 3 of 2011 is Section 31, which provides for the establishment of a ‘National Development Fund’ for PWDs. The purpose of the fund, among other things, is to provide or contribute to the cost of assistive devices and services and contribute to the implementation of projects for PWDs. It is clear from the purpose of Section 31 that the drafters of the Act intended such a fund to be used for the progressive realisation of the rights of PWDs as envisaged by the CRPD. It is however most unfortunate that even after six years since the enactment of this law the fund has still not been set up. I will therefore use this opportunity to flag up this issue and respectfully call on the new Government of His Excellency Brigadier (Rtd) Julius Maada Bio to consider the establishment of this fund as an area of priority for PWDs in the ‘New Direction’[1].

Other areas of great importance to which I would respectfully call the attention of the new government include the actualisation of free health care for PWDs, inclusive education and the structural adjustment of the environment to make it accessible to PWDs. Section 17(1) of the Persons with Disability Act 2011 provides for free medical services for PWDs but it is sad to state that this is still not functional because no health care drugs are presently available for PWDs in public health institutions. Apart from the provision of health care services, the Act in Section 14(1) also provides for free education at tertiary level and further states in Section 14(2) that the government ‘shall’ ensure the structural adaptation of educational institutions to make them easily accessible to persons with disabilities. Inasmuch as the free education at tertiary level is being provided, one fundamental problem with this free education scheme is the fact that even though the education is free for PWDs at tertiary level, it is practically not accessible because the necessary structural and environmental adjustments have not been made. In the entire country, it is only the University of Makeni that has a ‘Special Needs Department’ that caters for PWDs. The environment and buildings at Fourah Bay College, Institute of Public Administration, College of Medicine and Allied Health Science, Njala University, the Milton Margai College of Education, Science and Technology, and other tertiary institutions are nothing but death traps for persons with disabilities. The environment is simply not user friendly for PWDs. There are no braille, no ramps and lifts, and no sign language facilities. Even our national laws are not user friendly to the visually impaired because they have not been translated into braille. This is most disheartening especially when one considers the fact that persons with disabilities are entitled to a barrier-free environment as stated in Section 24(1) of the Persons with Disabilities Act. This right is not only limited to buildings of educational institutions but also extends to every public building and public transport.

Indeed one cannot deny the fact that Sierra Leone is a developing country that is struggling with inadequate resources. However, the fact that Sierra Leone does not have adequate resources is not a justification for these provisions not to be made for PWDs; we just cannot wait for a perfect time to implement the Persons with Disabilities Act, we need a practical paradigm shift from political lip service and the time is now. I therefore respectfully call on the new government, in light of the great potentials in the New Direction, to prioritise its programmes and actions in line with Sierra Leone’s obligations under national and international laws with the view that the government bears the primary responsibility to create the necessary social, political and physical environment for the progressive realization of the rights of persons with disabilities.

[1] The ‘New Direction’ is the theme and philosophy of the ruling SLPP’s manifesto and it is based on the idea of positive change and development; it was unveiled on 18th November 2017.

About the Author:
Joel Tejan Deen-Tarawally Esq. is a human rights lawyer and an alumnus of the Centre for Human Rights, Faculty of Law, University of Pretoria. He holds an LLM in Human Rights and Democratisation in Africa, a Barrister at Law Certificate (BL), Bachelor of Laws (LLB Hons) and a Bachelor of Arts degree. He is currently working with the Sierra Leone Legal Aid Board where he provides legal services to poor people in Sierra Leone.