← Reproductive Autonomy of Women and Girls under the Disabilities Convention
Violence against women and girls in Africa: A global concern to ponder on International Women’s Day and beyond →

The unspoken: Unsafe abortion in The Gambia and the necessity for legal reform

In the Gambian context, the right of women to an informed choice and access to family planning and appropriate health-care service remains contentious due to the socio-cultural and religions dimensions. Being a society where deep-seated traditions and the Islamic religion play a major part in the life of a person and society, issues of sexuality and procreation are generally interpreted accordingly.

The Gambia has one of the most restrictive abortion laws in Africa, which criminalises abortion based on colonially inherited penal code (Criminal Code, Act no. 25 of 1933). The Criminal Code follows the abortion law as provided in the English Offences against the Person Act of 1861 and subsequent interpretation by the Courts such as in the 1938 case of R v Bourne (3 ALL ER 615, [1939] 1 KB 687).

These domestic laws must, however, be interpreted in light of international law obligations. The Gambia has signed and ratified the Protocol to the African Charter on Human and Peoples’ Rights on the Rights of Women in Africa (Maputo Protocol) and domesticated it into the Women’s Act 2010. Article 14(2(c) of the Protocol provides for medical abortion in cases of sexual assault, rape, incest, and where the continued pregnancy endangers the mental and physical health of the mother or the life of the mother or the foetus.

Section 30(1) of the Women’s Act permits abortion only where continued pregnancy endangers the life of the mother or foetus but not on the grounds of rape, incest, and on request or for socio-economic reasons.  Government is also further supposed to cover the medical cost for the women who cannot afford the needed medicalised services (section 31(4)).  Clearly, section 30(1) does not adhere to obligations under the Maputo Protocol and other human rights provisions. In this regard, the Human Rights Council has noted that The Gambia’s restrictive laws that criminalise abortion even in the case of rape, is contrary to the right to life under article 6 of the International Covenant on Civil and Political Rights (CCPR/CO/75/GMB/ 2004).

With such a restrictive stance, back street abortions appear to be the only choice for many women who require abortion services. Here is a sobering fact: abortion in The Gambia is a common experience that women undergo everyday but are silenced for fear of judgment. Abortion is performed unreported and undocumented, even in medical facilities. Although, we informally know of illegal abortion happening, there is a gap in terms of the statistics relating to unsafe abortion and its consequences. Unsafe abortion takes place because criminalisation drives the practice underground and private medical institutions that are willing to take the risk of breaking the law and perform medical abortions charge exorbitant fees that are unaffordable to most women and girls who need such services. Consequently, many women and girls are left with the only option of resorting to quacks or using other crude measures to procure unsafe abortion services. This is also applicable to women who qualify for medicalised abortion but cannot afford due to the failure of government to make the necessary funds available for the provision of such services as required by the section 31(4) of the Women’s Act. 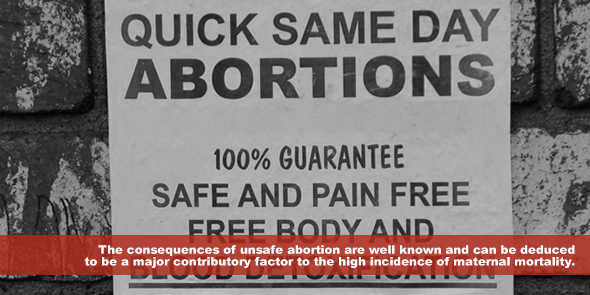 The consequences of unsafe abortion are well known and can be deduced to be a major contributory factor to the high incidence of maternal mortality, at a ratio of 443 deaths per 100,000 live births. Maternal deaths account for 36 per cent of all deaths among women age 15-49 (DHS 2013). According to a 2011 study on the most common reproductive health problems in the gynecology ward of Royal Victoria Teaching Hospital (now Edward Francis Small), miscarriages encountered at the Gamtel Ward were mostly associated with some sort of septic abortions resulting from illegal terminations, with young women forming the majority. This is not surprising as The Gambia has a youthful population – 64.1 per cent of the population below the age of 24, with 38.5 per cent between the ages of 15 and 35. In addition, 15 per cent of women age 20-49 had sex before age 15 and 42 per cent before age 18. (DHS, 2013). The Gambia Family Planning Association has also noted that based on its experience, induced abortions are highest among unmarried adolescents between the ages of 14-24 years, mainly in the urban and peri-urban areas (GPFA, 1996).

The complications arising from septic abortion might possibly lead to death, but als0 due to treatment via hysterectomy, girls as young as 18 years are left permanently infertile. The World Health Organization (WHO) estimates that approximately 25 per cent of unsafe abortions in Africa are performed on teenagers aged 15-19 years, with disastrous effects for these girls and women (WHO, 2012).  With The Gambia having a contraceptive prevalence rate of a meagre 9 per cent in 2013, which was among the lowest in Africa, young women usually undergo abortion to cover up the shame and stigma attached to unplanned pregnancy. In a Muslim dominated society such as The Gambia, pregnancy before marriage is seen as a social taboo. Due to socio-economic reasons including the premium placed on having many children in Gambian societies coupled with poverty, married women also procure abortion without their husbands knowing. These women are mostly valued for their fertility and generally have little or no decision-making power regarding the number and spacing of children, forcing them to undergo illegal abortions as a method of family planning.

Such a backdrop is further compounded by the limited and sometimes non-existent access to sexual and reproductive health and rights information and services especially for women. The Gambia Reproductive Health Commodity Security Strategic Plan (2011-2015) gives an indication as to cases targeted for post-abortion care management. These are: 402 cases in 2011; 690 cases in 2012; 973 cases in 2013; 1221 cases in 2014; and 1446 cases in 2015. The above incremental figures might be an indication as to the alarming prevalence of cases of post-abortion treatment in The Gambia, which is conveniently ignored by government and not considered a priority. For instance, the National Health Policy (2012-2020), conspicuously contains no provision on termination of pregnancy services.

In addition to restrictive laws, a contributor to unsafe abortion in The Gambia is the pervasive social stigma that surrounds the topic, worsened by women’s low social status and lack of empowerment. By and large, women in The Gambia still lack autonomy and cannot make decisions about how to manage their fertility or about other critical issues in their lives. Furthermore, ideological branding due to a moral and religious rhetoric makes addressing unsafe abortion less responsive to public health and human rights arguments.

Even as Islam continues to play a central role in the issue of (de)criminalisation of abortion, we need to pay attention to countries that have same religious traditions but differ radically when it comes to issues relating to abortion. For instance, Tunisia was the first Muslim country to liberalise abortion since the 1960s. In 1973, the right to abortion was extended to married and unmarried women despite the number of children and without the husband’s consent. Tunisia has shown improvement on women’s reproductive health. A considerable impact has been on the reduction of maternal mortality, which currently stands at 62 deaths per 100,000 live births (WHO, 2015).

To end the unacceptable situation of women and girls dying or suffering severe consequences from the entirely preventable cause of unsafe abortion in The Gambia, both political and societal will is essential to addressing the problem. Given the historic shift from an authoritarian regime of 22 years to a democratic dispensation and in light of the expected outcomes of a new constitution and revision of the Women’s Act and Criminal Code (The Gambia National Development Plan, 2018-2020), we call for revision of the legal framework for abortion. Government must amend the colonial abortion law legacy, remove all punitive measures especially for women undergoing abortion, and expand the grounds for legal abortion to cases of rape, incest and on demand.

It is important for our leaders to recognise that legal restrictions on abortion does not prevent abortions from occurring; they only ensure that the procedure remains unsafe. It is important to acknowledge that all women, young, old, married, single, poor or rich are susceptible to unwanted pregnancy and unsafe abortion in The Gambia.

If were are to make any progress in safeguarding women’s sexual and reproductive rights and health, we can no longer be silent. The long over-due conversation about abortion in The Gambia needs to happen now.

About the Author:
Satang Nabaneh is a Gambian feminist, human rights defender and researcher. She is currently a Doctoral Candidate and Project Officer, Women Rights Unit, Centre for Human Rights, University of Pretoria. Her research interests include a broad range of issues related to human rights, democracy and constitutionalism.

One Comment on “The unspoken: Unsafe abortion in The Gambia and the necessity for legal reform”