← Tanzanian Court: Third party consent to marriage of girls under 18 is unconstitutional
Rethinking the North-South divide in international criminal justice: Reflections from an African viewpoint →

South Africa’s intention to withdraw from the Rome Statute of the International Criminal Court: Time to seriously consider an African alternative?

While the decision by South Africa to commence the formal process of withdrawing from the Rome Statute of the International Criminal Court is shocking, honest observers will admit it was not entirely unforeseen. African countries through the African Union (AU) have long voiced misgivings about the International Criminal Court (ICC) and it was just a matter of time before the usually slow-moving AU clock started ticking. The AU had earlier this year urged its members to consider withdrawing from the Rome Statute.[1] This was triggered by the refusal by the United Nations Security Council and the ICC to accede to the AU’s requests for suspension or termination of the cases against Sudan’s president Omar al-Bashir and his Kenyan counterpart Uhuru Kenyatta and his deputy William Ruto.

While South Africa’s decision should be condemned, nothing much is likely to come of such condemnation. Treaties are a product of state consent[2] and it follows that withdrawal is equally a unilateral act of the state.[3] Even if an argument could be advanced against such unilateralism, the process is still a political one which rests almost entirely with the political class, at least in imperfect democracies. South Africa’s move is likely to embolden other African countries to commence similar processes. South Africa is Africa’s biggest economy and the AU’s largest member contributor. It is also arguably one of Africa’s better-off imperfect democracies. For these reasons, it is often the case in continental affairs that other African countries hold on to their cards until South Africa plays after which they emerge from their cocoons and play theirs in more or less similar fashion. With the possible exception of ‘righteous’ Botswana and perhaps Mauritius that considers itself African only when the situation suits it, the possibility that other African countries will follow South Africa’s lead on the ICC cannot be ruled out. In light of such possibility, how then does Africa assure its citizens that the fight against impunity as is entrenched in its founding instrument[4] is still top of its agenda, if at all it ever was? 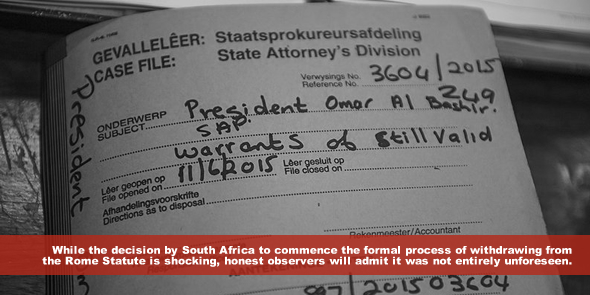 What next for Africa after the ICC?

Concerted effort is indeed necessary to try and dissuade AU member states from following South Africa’s lead. However, it is equally wise at this point to begin considering alternatives to the protection vacuum a mass withdrawal would cause. One possible but imperfect alternative is the Protocol on Amendments to the Protocol on the Statute of the African Court of Justice and Human Rights (Malabo Protocol)[5] which seeks to reorganise the proposed African Court of Justice and Human Rights by creating an international criminal chamber. Adopted in June 2014, this protocol is yet to be ratified by any member state and as such the criminal chamber remains a mirage. While commentators have rightfully expressed misgivings about the proposed court, it is the author’s argument that considering recent developments, this could perhaps be the continent’s last stand against impunity.

Reconciling AU obligations with a continental court for international crimes

The AU imposed an obligation on itself to reject impunity and promote and protect human rights.[6] Its formation was in itself intended to signal a departure from its predecessor’s state-centric approach which prioritised governors over the governed, to a people-centric approach which prioritises human rights.[7] Indeed, the AU recently reiterated this commitment in its Agenda 2063 by emphasising its aspiration towards a culture of human rights and justice. Whether it has lived up to this aspiration is another discussion altogether. The AU has also in the recent past made ambitious and progressive commitments relating to democracy and governance that it is arguably keen on implementing.[8] Article 25(5) of the African Charter on Democracy, Election and Governance, for example, requires the AU to formulate an international crime of ‘unconstitutional change of government’ to be enforced by a continental court. Such a commitment would only be practical with a continental court capable of enforcing it hence the Malabo Protocol.

In the absence of the ICC, an African court with international criminal jurisdiction is also perfectly consistent with and necessary under the AU’s international obligations. Article 52(1) of the Charter of the United Nations permits regional bodies to create regional mechanisms necessary for the maintenance of international peace and security. Ability to provide accountability for gross human rights violations amounting to international crimes is a fundamental element of ensuring peace and security. Indeed, the African Charter on Human and Peoples’ Rights (African Charter) emphasises that the right to peace is indivisible from and complementary to other human rights.[9] As such, upon withdrawal from a UN-backed mechanism, Africa is obliged to provide a regional alternative in the form of a criminal court as this is necessary not only for the maintenance of peace and security, but also to plug the remedial gap created by opting out of the ICC mechanism.

The case for a regional accountability mechanism

A continental mechanism presents certain advantages as against the ICC. First, the ICC is so geographically and contextually far removed from Africa that African citizens can neither easily access nor reasonably identify with the court. Ownership is very crucial if a non-domestic mechanism is to be considered legitimate by the people it has personal jurisdiction over. The ICC’s location at The Hague, several miles from Africa, makes it geographically inaccessible to victims thereby inevitably isolating them from the process.[10] Understandably, this inaccessibility fuels the perception among African victims that these mechanisms respond more to international audiences than to the victims themselves.[11] An African court located in Africa would appeal to both citizens and political leaders alike. On the one hand, citizens will be able to access the court with reasonable ease compared to the ICC. It would also serve to disabuse the notion that international criminal justice is ‘justice delivered by international courts’.[12] Political leaders, on the other hand, will arguably have little or no argument against a local mechanism of their own creation. Even if politicians find arguments against the court, such would be unlikely to find favour with African citizens as it would not be logically possible to level accusations of neo-colonialism against an institution of Africa’s own making as has been the case against the ICC.

Secondly, while the ICC’s focus on those considered to hold the greatest responsibility for international crimes[13] is understandable from a logistical, financial and complementarity perspective, but it often leaves scores of victims dissatisfied. In circumstances of mass violations, the sheer number of perpetrators involved is usually overwhelming. Further, by the time the ICC has to step in, it is often the case that the state is unable for one reason or the other to hold perpetrators accountable. Since the state cannot hold anyone accountable in the first place thereby necessitating the ICC’s intervention, chances are that even after the ICC steps in to indict the few individuals it considers as bearing the greatest responsibility, the state will still not be able to hold the remaining majority accountable. Kenya, for example, has not been able to prosecute many of those who perpetrated the violence that followed disputed elections in 2007 beyond the one individual its domestic courts convicted for murder[14] and a few others for petty crimes. In such situation where states are unable to prosecute, a regional court could offer the only possible alternative.[15] Arguably, such a court could try more perpetrators than the ICC since logistical challenges are reduced due to close geographical proximity.

The argument here is by no means an endorsement of withdrawal from the Rome Statute as such a discussion is beyond the scope of this piece. In fact the author recognises the imperfect design of the criminal jurisdiction of the proposed court as the protocol expressly gives immunity from prosecution to heads of state and government and senior government officials for the duration of their term.[16] The argument rather is that considering the situation in which our political leaders have placed us, over which we had no control, it is reasonable to assert that it is time for Africa to play its part in positively contributing to international criminal law by ratifying the Malabo Protocol and operationalising the court as a first step. While international criminal law is one of the most highly developed branches of international law,[17] Africa’s contribution to this development so far has largely been as its subject rather than its developer. This could perhaps be Africa’s opportunity to challenge the stereotype and change the narrative by actively and positively contributing to further development and enrichment of international criminal law.

[5] Protocol on Amendments to the Protocol on the Statute of the African Court of Justice and Human Rights, Assembly/AU/Dec.529(XXIII) (2014).

[8] D Deya ‘Worth the wait: Pushing for the African court to exercise jurisdiction for international crimes’ 2012 http://www.osisa.org/openspace/regional/african-court-worth-wait (accessed 22 October 2016).

[16] Protocol on Amendments to the Protocol on the Statute of the African Court of Justice and Human Rights, Assembly/AU/Dec.529(XXIII) (2014),  art 46A bis.

About the Author
Owiso Owiso is an Advocate of the High Court of Kenya and is currently pursuing an LLM in Human Rights and Democratisation in Africa at the Centre for Human Rights, University of Pretoria. His interests are human rights, transitional justice and governance.

One Comment on “South Africa’s intention to withdraw from the Rome Statute of the International Criminal Court: Time to seriously consider an African alternative?”