← International human rights advocacy and the abolition of irreducible life imprisonment in Zimbabwe
20 years after the TRC: Are we any the better? →

A shift towards culture and skills development: A solution for internally displaced persons in Nigeria

The ongoing insurgency by Boko Haram and the terrorist activities it has perpetrated since 2009 has led to a huge displacement of people from Northern Nigeria. According to the Internal Displacement Monitoring Centre, there is an estimated 2,152,000 internally displaced persons (IDPs) in Nigeria. While there is no international binding instrument for IDPs, Nigeria is a signatory to the African Union Convention for the Protection and Assistance of Internally Displaced Persons in Africa (Kampala Convention). Nigeria ratified the Kampala Convention on 17 April 2012 which means that it has a primary duty and responsibility to provide protection and humanitarian assistance to IDPs within Nigeria.[1] Irrespective of this ratification, Nigeria’s treatment of IDPs remains poor. According to reports, some challenges IDPs face in camps include inconsistent and poor feeding, poor sanitary conditions, and a lack of proper medical conditions and security.[2]

On the basis of the difficulties faced by IDPs in Nigeria, when I arrived in Omaha, Nebraska, USA and sat down with my father, Alasa Hassan Braimah on 29 March 2016, the discussion that ensued may represent the best solution to the problems encountered by IDPs in Nigeria.

The discussion consisted of problems and solutions. The underlying problems associated with the dire conditions of IDPs that emerged from the discussion were the presence of corruption and the failure of state agencies to implement skills acquisitions for IDPs. A related problem is that the budget allocation for IDPs is not accounted for yearly and so budget spending is not monitored.

During the discussion, it was determined that any solution should have two aspects. It should be relevant to the culture prevailing in that region and it should be adaptive. This means that settlements and not camps should be created for IDPs in Nigeria. The difference between settlements and camps is that the latter is a short term approach to people fleeing conflict or persecution while the former would be a more effective and long term solution to IDPs as there are no signs that a successful war against terrorism can be waged in Nigeria. In addition, with farmers making up a large percentage of those IDPs fleeing conflict, the settlements should be associated with agriculture. Also, in terms of security, it is advisable that the inhabitants of the settlements have records of documentation in order to monitor their populations. 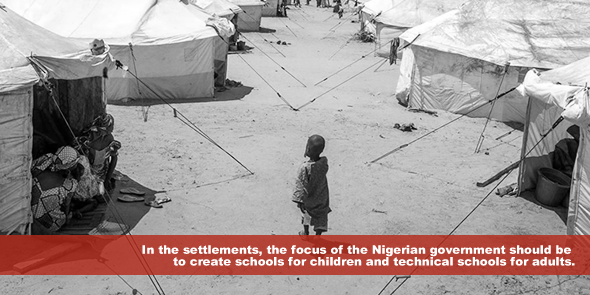 In the settlements, the focus of the Nigerian government should be to create schools for children and technical schools for adults. Therefore, for the adults of working age, there should be provision of skills development that may be necessary for them to survive and motivate some IDPs to start their own businesses within or outside the settlements. Skills development should include security guard work, metalwork, carpentry, motorcycle taxi (Okada) service, and car and motorcycle mechanics which are in demand in Nigeria.

These proposed solutions which include a shift from camps to settlements would be more beneficial to IDPs who currently survive on donations made by international agencies and individuals. However, due to the perverse level of corruption in Nigeria, these recommendations cannot be achieved unless there is proper implementation of the country’s anti-corruption laws such as the Independent Corrupt Practices & Other Related Offences Act 2000. Action taken should also include monitoring the budget for IDPs in order to ensure it is spent correctly and not appropriated as has occurred in previous years.

[1] African Union Convention For the Protection and Assistance of Internally Displaced Persons in Africa,  Article 5

About the Author:
Tim Sahliu Braimah (LLB (Luton, UK), LLM (King’s College, London), LLM Legal Research (Middlesex University, London) is a human rights researcher whose focus is on vulnerable groups such as refugees, women and children. Braimah has been researching and writing since 2013 and has had his work published in reputable journals such as International Journal of Refugee Law and African Human Rights Law Journal. His work on sex trafficking has been utilized by the European Asylum Support Office as part of its report on Nigeria’s sex trafficking of women.

2 Comments on “A shift towards culture and skills development: A solution for internally displaced persons in Nigeria”