← We must include and empower people with disabilities
The National Migration Policy and its implementation framework: A precursor for a more effective migration governance in Nigeria →

Eritreans observed the 54th Anniversary of the Beginning of the Armed Struggle for Independence on 1 September 2015. While the success of the armed struggle in attaining independence from Ethiopian rule should have been a cause for celebration for the whole nation, it was instead characterised with mixed emotions.

On the one hand, the ruling party, the People’s Front for Democracy and Justice (PFDJ) and some Eritreans, embraced and glorified the country’s protracted 30 year war with Ethiopia-describing it as one of Africa’s formidable revolutions.  On the other hand, many Eritreans, in particular those who  fled, have by implication of their seeking refuge in other countries, expressed their discontentment with the current  socio-political landscape in which widespread, systematic and gross human rights violations are perpetrated with impunity. 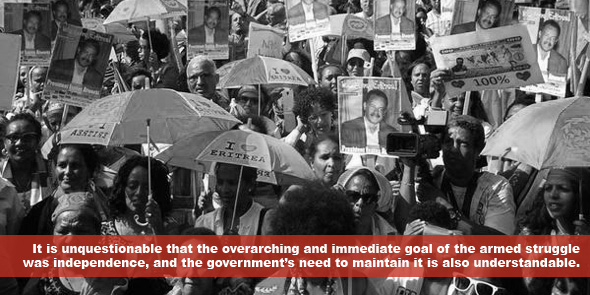 The feeling of disappointment is not with the armed struggle itself or the virtues that underpinned it. It is rather with the fact that 24 years after independence many Eritreans still feel oppressed. The difference is that the oppression is not from an external force but from the very government that spearheaded them to independence. The sense of oppression came as a net result of the originally well-intentioned but now draconian measures the government has taken to safeguard the sovereignty and territorial integrity of Eritrea, reportedly under threat. These include indefinite national conscription, banning of political parties, except the PFDJ, the arbitrary arrests and detention incommunicado of the political leaders and journalists accused of unduly critiquing the government.

It is unquestionable that the overarching and immediate goal of the armed struggle was independence, and the government’s need to maintain it is also understandable. In fact, the need to protect Eritrean independence and territorial integrity had never been so greater than since the break of the 1998-2000 border war- an alleged consequence of territorial fine tuning left undone upon independence from Ethiopia.

However, the Eritrean government’s steadfast “preserve national security at all cost” attitude has led to abandonment of the corresponding long term goal of the armed struggle i.e., the establishment of a constitutional democracy taking the backseat. This has in turn spelt dire consequences for the human rights of Eritreans.

According to the PFDJ National Charter , achieving independence was not only the conclusion of an important chapter in history, but the beginning of a new chapter, i.e., building a peaceful and just society respectful of human rights and founded on principles of the rule of law and democracy. Therefore, unless a constitutional democracy is established within which a respect for human rights culture thrives, the independence won at the cost of the precious lives of dedicated men and women may be rendered meaningless.

The constitutional democracy in discussion is a system of government in which political authority i.e., the power of government is held in check and distributed by the supreme law, the constitution. Furthermore, the electorate i.e., the general voting populace within the political society has the choice of deciding who become their leaders as well as effective means of holding government officials accountable for their decisions and actions while in public office.

The adoption and ratification of the Eritrean Constitution in 1997, the general provisions of which enunciate the promise of a constitutional democracy, was intended to serve as the hallmark of this form of governance. Unfortunately, the Constitution remains unimplemented and invariably the long term goal of the armed struggle effectively abandoned with the future looking bleak. Moreover, as a consequence of the unimplemented Constitution, it has proven difficult for Eritreans to know exactly where their rights begin and end, and how to hold the government accountable for its actions, at domestic level at the least.

It is because of this reason that for the discontented Eritreans the 54th anniversary was no celebratory occasion. It was a day of reflecting on the aim of the armed struggle and whether, in light of the incessant war-footing the government has the country on owing to perceived threats to its national security, the independence won was independence in form over substance. Did they engage in a 30 year long war only to live in an unremitting militarised society where the rule of law and respect for human rights are seemingly foreign concepts?

Regrettably, Eritrea has fallen prey to the political disease afflicting some African countries namely, toppling a dictatorship only to replace it with another. It could be argued that this destructive path that the Eritrean government has chosen was done unwittingly, due to not having a well-conceived post-independence political transition plan or to perceived threats to its national security as per its “no peace no war” rhetoric. But whatever the reason, it has destined the present and future generation to a rather prolonged state of despair, and has unfortunately eclipsed the glory that was the gaining of independence in 1991 and the promise for a better future it held.

About the Author:
Lebogang Maxelegu holds a Bachelor of Laws (LLB) from the University of the Witwatersrand. She is currently an Assistant Researcher at the Centre for Human Rights, University of Pretoria. She is also the Campaign and Advocacy Officer at the Human Rights Institute of South Africa. Previously she interned at Lawyers for Human Rights in the Refugee and Migrant Rights Programme, and worked as a Socio-Legal Researcher at Coram’s Children Legal Centre.