Female genital mutilation (FGM) is one of the cultural practises embedded amongst the Venda community of north-east of South Africa. Eight weeks or less after childbirth, Venda women undergo a traditional ceremony called muthuso. Muthuso is a process of cutting the vaginal flesh of the mother by a traditional healer. The flesh is mixed with black powder and oil and applied on the child’s head to prevent goni. Goni has been described as a swelling on the back of a child’s head. The Venda people believe that goni can only be cured using the vaginal flesh of the child’s mother. Women who experienced FGM stated that they bleed excessively after the ceremony. Moreover, the women stated that there is no postnatal care in Venda. Consequently, the women use traditional medicine and sometimes this leads to death because of substandard treatment.

Vendas also practises FGM as initiation for girls into womanhood. The girls reside in a ‘nonyana’ hut for 24 hours until an appointed day when an old woman performs the clitoris cutting by the river banks.  The girls are branded with a mark on their thighs as evidence of having attended initiation.

Migrants in South Africa including Sudanese and other African communities continue practising FGM. The families invite women into their homes who clandestinely circumcise often despite pleas from the girls. Herbs are applied to the cut places to quicken the healing. The girls are often traumatised following the practise.

The World Health Organisation does not list South Africa as a country where FGM is practised. In 2005 during the deliberation of the Children Bill, the South African Girl Child Alliance (SAGCA) presented a report highlighting the non-existence of FGM to South African parliamentarians on the Social Service Select Committee. The SAGCA report indicated that during the initiation ceremonies for women, there was no FGM being practised.

Article 5(a) of the Convention on the Elimination of all forms of Discrimination against Women obligates state parties to ensure that all cultural practises that violate the rights of women are eliminated.

Regionally, the Protocol to the African Charter on the Rights and Welfare of the Child on the Rights of Women in Africa imposes a duty on state parties under articles 8(f) and 2 to institute measures that prohibit all forms of harmful practises. Article 5 obliges governments to engage in public awareness against FGM, to enact legislation prohibiting FGM and to provide victim support for women affected by the effects of FGM.

South Africa enacted subsidiary legislation to address FGM. The Promotion of Equality and Prevention of Unfair Discrimination Act (Equality Act) outlaws discrimination of any person on grounds of gender and culture, including FGM. Under section 12(2) (a), the Children’s Act explicitly prohibits genital mutilation or circumcision of female children as opposed section 8(b) Equality Act which only prohibits discrimination based on FGM. 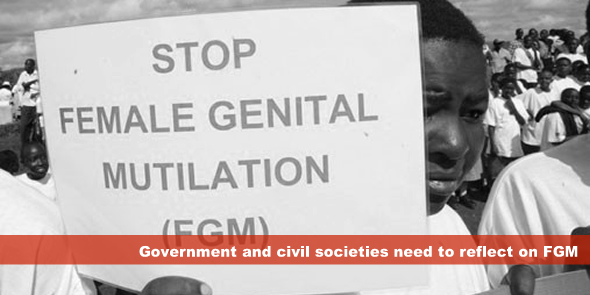 The South African government has engaged in initiatives to curb FGM, for example national research and sensitization workshops where FGM is prevalent in liaison with government departments of health, culture and education. There is no acknowledgment by the government that FGM exists in South Africa. Most information obtained on FGM in South Africa is based on research by individuals or international organisations.

Culture is an aspect of African traditions that cannot be easily dispensed with. Despite the fact that international treatises deem FGM as an immense violation of human rights to females, those who practise FGM perceive it as a rite of passage and an avenue for children to receive protection from their mothers while eight weeks after birth.

In order to curb FGM, there is need for government to continue partnering with civil societies to sensitize communities and encourage them to reflect on the implication of FGM and make a conscious decision to end the practise.

About the Author:
Kitui Barbara is currently a postgraduate student pursuing the LLM in Human Rights and Democratisation in Africa at the University of Pretoria. As part of the LLM, Kitui undertook a field research in Venda, South Africa, under the topic ‘Hindrances to the fulfillment of the right to maternal healthcare in Venda.’ Other sources used for this research can be found here. Kitui worked as a Legal Officer with the Foundation for Human Rights Initiative in Uganda before joining the LLM programme.