← The misconceptions in section 35 (1)(e) of the Nigerian constitution and the right to liberty of persons with mental disability
To whom it may concern: South Sudan may not be ready for elections, yet democracy cannot wait →

Is South Africa turning a blind eye to climate injustices?

Climate change is the greatest threat to mankind as it poses a major threat to the survival of humans on earth. It has a negative impact on the prospects of economic and social prosperity of any nation. South Africa has over the years witnessed a number of her citizens; particularly poor susceptible groups being severely affected by the impacts of climate change. Most recently, the Kwazulu-Natal floods did not only displace indigent people it also led to the loss of lives. The South African government turned a blind eye to this and has been the slowest to react. Two months after the floods occurred, the government is yet to allocate satisfactory financial and human resources to redress the situation. This can be partly linked to the absence of a legislative regulatory framework which provides for an effective, clear and comprehensive response to climate change in order to minimise its impact. Currently, climate change is regulated in a piecemeal manner. Since the Constitution was adopted, an overwhelming number of statutes of environmental nature were enacted including the National Environmental Management Act 107 of 1998 and the National Environment Management: Air Quality Act 39 of 2004. Though both these statutes do not refer to climate change in explicit terms they require the environment to be utilised in a sustainable manner that is not harmful to human beings and regulate the emission of greenhouse gases respectively. Worth mentioning, however, is the Carbon Tax Act 15 of 2019 as well as the Disaster Management Act 57 of 2002 both of which have a direct bearing on climate change. The latter Act is the legislative framework within which the government responds to the impacts of climate change. The former makes explicit reference to climate change in its efforts to avoid dangerous anthropogenic climate change by stabilising greenhouse gas emissions while also ensuring sustainable socio­ economic development.

The importance of a climate change framework cannot be overemphasized. In the context of South Africa, this is even more important. Climate change affects water, food, health and human life itself. What is more unacceptable is that poor people bear the brunt of climate injustice. Recent developments in South Africa show that there is a desperate need for an effective climate change legislative and policy framework. The absence of a legislative framework is a grave miscarriage of justice for indigent people. South Africa has been battling droughts, floods and food shortages. All these unfortunate events can be linked to the lack of effective climate change mitigation and adaptation response, through appropriate legislative, policy, and administrative measures. In such instances where the events could not have been prevented, these would have minimised the impact thereof. This is, nevertheless, still an understatement. Words cannot express how significant the effective regulation of climate change is. 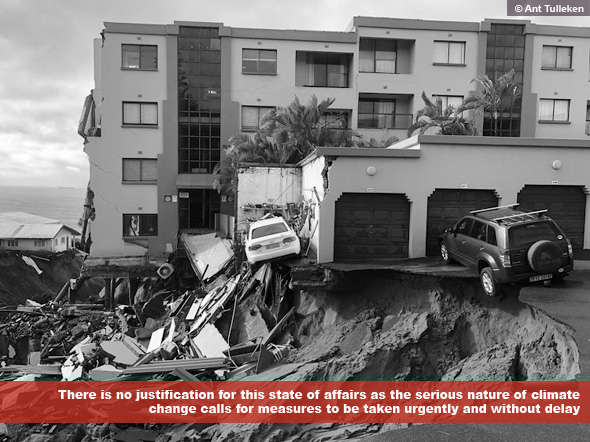 The concept of climate change is relatively new to South Africa. Unsurprisingly, there has been little to no legislative activity in this respect despite the enactments of various environmental laws in the past 25 years. There is no justification for this state of affairs as the serious nature of climate change calls for measures to be taken urgently and without delay. The Disaster Management Act 57 of 2002 is insufficient to respond effectively to the adverse impacts of climate change. Climate change and disasters are inextricably linked and must not be viewed and regulated in isolation. It, therefore, follows that climate change is deserving of its own special legislative, policy, and administrative framework to respond coherently thereto and mitigate its devastating effects. The international climate change regime, on the other hand, leaves much to be desired. At the heart of it is the overarching principle of state sovereignty coupled with the lack of enforcement measures at the international level, which has resulted in little compliance with international climate law. One example of such is the Convention for the Protection and Assistance of Internally Displaced Persons in Africa which is lauded as the most progressive regional climate change framework. South Africa has surprisingly refused to ratify this Convention despite its important nature and consequently evaded obligations to take measures to tackle climate change.

Notably, a Climate Change Bill was formally introduced to Parliament on 18 February 2022 much to the delight of environmental activists. Though this Bill is a welcome development, an in-depth analysis of the Bill reveals that it is not without flaws. One such flaw worth mentioning is the lack of means of enforcement, coercion and compliance despite the critical nature of the Bill. In several respects, the Bill has loopholes that talented corporate lawyers can help their clients to exploit. In its offence and penalties section, the Bill only makes the failure to prepare, submit and implement an approved gas mitigation plan a punishable offence. Lawyers may well advise their clients to maximise profits by exceeding their carbon budget provided that profits will exceed the carbon tax payable. This will defeat the purpose of the Bill. Another cause for concern is the fact that it does not provide a deadline for the setting of carbon budgets. To maximise profits, entities will not bother to set carbon budgets until a deadline, or a timeframe is established. It is hoped that these concerns will be addressed before the Bill is passed.

The solution lies in a radical policy shift towards a human rights-based approach to climate change. A human rights-based approach is the only approach that will ensure climate justice in South Africa. It will give effect as much as is practicable to rights enshrined in the Bill of Rights and international instruments. It will ensure that no group is disproportionately affected by climate change as compared to another group. The reality is that vulnerable groups contribute less to climate change but end up being the most affected. This calls into question the right to equality and equal protection as this disproportionately affects indigent people. It is, therefore, the duty of the state to take such measures as necessary to ensure that these injustices do not continue. The government has instead elected to turn a blind eye to these injustices prevailing on a regular basis. Climate justice calls for the consideration of climate change in every development as a variable. The Climate Change Bill once passed into law will not be an adequate measure to address climate injustices in South Africa. It is equally important that it is followed by the adoption of complementary government policies, accountability mechanisms and political will to redress these injustices.

Sandile Nhlengetwa is a final year Legum Baccalaureus (LLB) candidate at the University of the Western Cape. He has been honoured three times for the three academic years he completed thus far by the Golden Key International Honour Society for achieving high marks. He has also been awarded the Dean’s Merit Award twice. He currently serves as a member of the Moot Court Society.