← Is Covid-19 bringing out the inequalities in the delivery of health services in Mauritius?
Time to consider decriminalising homosexuality in Ethiopia →

To be a healthy democratic state, Ethiopia needs Stability through Peace and Security, Inclusive Development, and Good Governance.

Ethiopia is at a crossroads. Despite recorded double-digit economic growth for more than a decade, the arguably slight opening of the political space and the increasing awareness of citizens about their rights and duties, the absence of a clear path to democracy through an institutionally designed system put Ethiopia at the crossroad. Though Prime Minister Abiy Ahmed pledged to reform Ethiopia’s authoritarian state, recently, Ethiopia is going through a hysterical period of political uncertainties whereby one cannot easily venture where the country is heading. Some suggested that Ethiopia is on the right track to democracy, and Abiy Ahmed is playing the dominant role. Others reject the idea that Ethiopia is getting into democracy, saying the reform government is just as undemocratic as its predecessors; it is instead an ‘old wine in a new bottle’.

Be this as it may, to say Ethiopia is on a clear path to democracy, one should think of three essential pillars. According to Kofi Anan, former secretary-general of the UN, “To build a healthy democratic society, you need to think of three pillars, and they have to be taken holistically. The first one is peace, security and stability. The second one is inclusive development, and the third and final one is the rule of law and respect for human rights…”

History suggests that dwelling in these pillars is not a choice; rather a necessity. One cannot focus on one and achieve the desired result because all three are important. If one focuses only on the country’s stability and treat the other two as less critical; first, respecting fundamental rights and basic freedom of the people will be in danger, which ultimately would lead to people’s revolt for freedom. Also, when the economy is maltreating the people, eventually, the socio-economic demand of the society will come to the street and shake the country. Either way, the problem will affect the democratic process.

In Ethiopia, coupled with widespread political and ethnic violence, failure to ensure the rule of law and the respect for human rights, and lack of all-inclusive development, the road to democracy is curtailed. As a result, the sparkling light seen at the end of the tunnel would be doused. This essay highlights where Ethiopia is in the development of the three pillars and what should be done to enhance the process of democratisation.

Peace and Security in Ethiopia

Peace and security imply a synergy term where peace is the absence of physical and structural violence, and security, generally, refers to the condition of not being threatened physically, economically and psychologically. So, both terms are essential to one another; the existence of one is a precondition and helps to realise the other. One cannot doubt the importance of peace and security in human life. A peaceful and secure situation in a country will create a suitable environment for economic and social development, promotion of the rule of law and the respect of human rights. As a result, no country can achieve overall development in the long term without peace and stability.

However, due to the complexity of society and politics, world peace is under constant threat. Various religious, identity, economic and political driven conflicts are spreading all over the world. According to the latest Global Report on Internal Displacement,   “Forty-eight million people were living in internal displacement as a result of conflict and violence in 59 countries and territories as of 31 December 2020, an increase of 2.1 million compared with 2019 and the highest figure on record”. Among the 59 countries, the Democratic Republic of the Congo, Mozambique, Burkina Faso, Sudan and Ethiopia from Sub-Saharan African countries, Syria, Palestine and Yemen from the Middle East, and Afghanistan in South Asia are the most prominent.

In Ethiopia, as a result of unsolved political controversies of the past and present, extreme politics is getting ingrained. Instead of solving issues through civilised ways like dialogue, various groups use violence to claim their interests. The country politics is dominated by polarised identity whereby politicians, by spurring grievances, ride the populist wave, flame the already existing tension and demonise their opponents, benefit from it. More problematic is the educated section of the society, who are supposed to lead the people to light, be part and parcel of this. As a result, various conflicts have been instigated in Ethiopia; and once already existed are exacerbated.

In lifting people from one economic class to the next level, development has to be inclusive. Otherwise, economic development can only benefit a few, which ultimately leads to resentment by most due to the hardships they are facing. The resentment then will be followed by social intolerance and distrust between the people and the Government to lead to instability finally. Consequently, the stability needed for the advancement of democracy will not be achieved.

Persistent socioeconomic inequality within the society also affects the promotion of good governance. First of all, the inequality itself is a violation of human rights by failing to fulfil the minimum obligation of the government.  In addition, when there is inequality, it leads to exploitation that can lead to problems like food insecurity, illiteracy, homelessness or disease. These are mostly the prerequisite for the prevalence of violence and violation of rights, as people are forced to pursue illegal methods of acquiring income to alleviate their problems.

Furthermore, deep inequality also leads to corruption which is the antithesis of the essential component of good governance, which is accountability and transparency. It is overtly proper that accountability and transparency play a prominent role in pursuing a democratic society.  The absence of it will lead to the abuse of state institutions, which are supposed to work for the community, by politically aspirant elites, as a means of enrichment. This tendency creates high stakes for democracy. 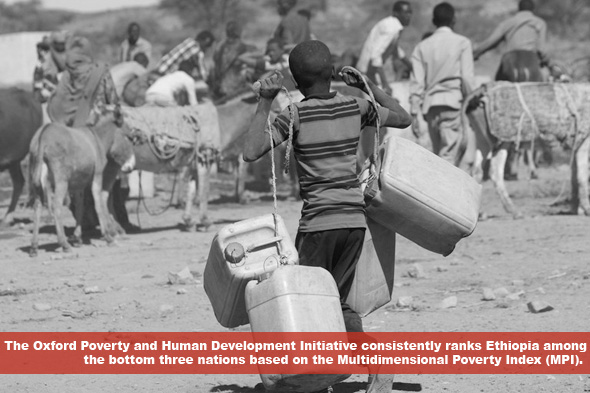 In Ethiopia,  a double-digit growth rate has been recorded in the last decade. However, despite the positive trends in poverty reduction in both urban and rural areas, the economic growth is not taken by many as an inclusive one. Scholars believed that the economic development in Ethiopia, instead of raising the living standards of the majority of the society, exacerbated deep inequality. There are many reasons that lead them to this conclusion. Ethiopia is considered as one of the countries where citizens are living in extreme poverty. In this regard, the Oxford Poverty and Human Development Initiative consistently ranks Ethiopia among the bottom three nations based on the Multidimensional Poverty Index (MPI).  In addition, the fruits of economic growth were not evenly distributed. This inequitable distribution of natural resources led to public resentments, which in turn resulted in civil demonstrations in most parts of the country to finally bring regime change. The lack of equitable distribution is manifested in four areas: The first is, in Ethiopia, the development of infrastructure between urban and rural areas are entirely different. People living in rural areas do not have access to infrastructure like roads, schools, health centres and others. Secondly, the disparity is also seen from region to region. Some regions in Ethiopia have very poor infrastructure compared with others. In this regard, Afar, Somali, Beninshangul and Gambela regions are the best example of having relatively poor infrastructure. Thirdly, there is a resentment within people living in the so-called developed regions. The recent demonstrations in Oromia and Amhara are the best examples. Youth in these regions revolted against the government calling for the abolishing of the domination of elites from one ethnic group [Tigrian elites]. Fourthly, most investment projects and capital were placed in a few developed regions: Addis Ababa, Oromia, Amhara Tigray and somewhat in SNNPR. The inequality is also manifested through the mismanagement of economic contributions by various sectors. For example, the producers of raw materials like farmers who grow and sell coffee beans are not benefiting to the level of changing their living; instead, it’s the brokers and the exporters who benefit most. As a result, the mismatch is creating problems in the progression of the democratic order.

Good governance is characterised by participation, transparency, accountability, the rule of law, effectiveness, equity, etc.  These are the essential elements needed for a country to build a healthy democratic system. This democratic governance orientation has been inspired by problems resulting in the government’s necessity to be more than a governor.  Accordingly, the traditional role of government, mainly to maintain peace and security, will not be sufficient. Instead, a “new political culture, in which traditional methods of delivering the services of the welfare state are no longer regarded as ‘empowering’” is needed. As a result, promoting good governance is an essential element to promote the rule of law by which accountability of individuals and government will be ensured. Also, in a country where rule law is the principle of governance, proper justice will be delivered. In addition, good governance helps maintain law and order by creating legitimate, effective, responsive institutions and policies.  This ultimately guarantees security to the people, which eventually helps to bring inclusive economic development. Good governance also promotes human rights by ensuring participation of citizens in political and public life, guaranteeing equitable inclusion of every sect of the society in decision making, and facilitating free, fair and competitive election through the institutions it has created. This will ultimately lead to the building of democratic order. In a democratic country where power is believed to be in the hands of the people and run entirely by and for the people’s will, good governance is the main prerequisite.

As admitted by the government itself, in Ethiopia, the absence of good governance is uncontested. One of the government’s main challenges is the widespread practice of mal-administration, which includes but is not limited to corruption, unnecessary bureaucracy, poor customer service management, non-participatory decision making, resource mismanagement and weak institutional structures. Despite the abundance of positive measures taken by the current administration, due to the absence of good governance, the country is experiencing widespread ethnic violence that undermines the rule of law and led to massive human rights abuses. In Ethiopia, the commitment of the government to alleviate socio-economic problems faced serious problems due to different not-good governance practices. The root cause of bad governance practice is the capture of the state by corporate ethnic elites, which makes governance in Ethiopia based on weak institutions and strong personal rivalries. This has left merit-based leadership in otiose whereby public posts are assigned to ‘ethnically affiliated party man’ without considering competencies. As a result, the government’s effort to implement its socio-economic policies undermined and caused various malpractices in different sectors. For example, poor management of public finance in the education sector, which caused problems in quality education. There are also connectivity problems affecting business,   frequent power interruption due to poor quality procurement of equipment, and high levels of corrupt acts in the water sector are some of the bad-governance practices. As a result, citizen’s social protection suffered which led to poor human development. Therefore, promoting the rule of law, pas

As clearly stated hereinabove, Ethiopia is stagnating in creating a healthy democratic system due to the lack of a proper path in the development of the three pillars. To improve this, the following measures should be taken: