← The National Migration Policy and its implementation framework: A precursor for a more effective migration governance in Nigeria
Of stereotypes and the ‘unsound mind’ clauses →

Political killings and related violence have found expression in public discourses and have shaped the political-legal landscape in Cameroon since the re-introduction of multi-party democracy in 1990. The post-1990 constitutional state that Cameroon has become recognizes the universality of human rights; especially the right to life and security of the person. While these progressive laws further distinguish Cameroon as a state with outstanding legal commitments towards the universality of human rights, they have failed to find expression in the implementation process.

Creating such a strong visibility of human rights within the law is not enough. How the law is implemented determines its real worth and effectiveness. Accountability for crimes in a fair and expeditious trial remains the hallmark of an efficient criminal justice system.

This post examines how the state responded to cases of political killings and related crimes in Cameroon from the dimensions of legal and policy frameworks; legal processes; legal innovations; and institutional issues. It focuses on three key actors; the courts, the Legal Department, and the Police, and uses such assessment indicators as prosecution, conviction, and acquittal rates. 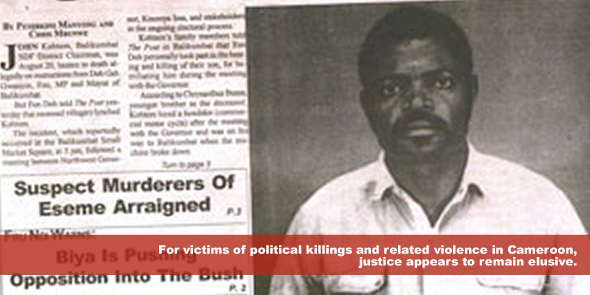 A review of the above cases confirms that prosecutions were never initiated for the 6 killings in 1990; the massive destruction of property, and the killing of Fomukong in 1992. Therefore, 50% of the cases were never prosecuted.

Prosecutions were ordered for the killings of Eseme, Kohtem, and Diboule, resulting to a 50% prosecution rate. However, in the Diboule case, the preliminary inquiries that were begun in 2006 remain inconclusive to date. Improved relations between the CPDM and SDF political parties have stoked suspicion that justice in this case has been sacrificed on the altar of political expediency.

Although the Eseme and Kohtem killings fell to be determined by the ordinary courts, innovative measures were introduced to alter the structural compositions of the courts. Judges were co-opted from other jurisdictions apparently with approval from the Minister of Justice. The specially constituted courts lost the competence to determine the cases. The convictions recorded in these cases were later overturned on appeal on the common ground that the trial courts were irregularly constituted, resulting to a 0% conviction rate.

While special courts are common features in post-conflict societies, they are however, hybrid mechanisms that lie somewhat at the interface of wide spread heinous international crimes and domestic jurisdictions and driven by the logic to maximize justice outcomes. Jurisdictional regularity is the bedrock of a legitimate trial process. Judges with ordinary territorial jurisdiction are exclusively competent to determine cases within their territorial precincts. In deserving cases, judges from different jurisdictions in Cameroon may preside over cases outside their territorial jurisdictions, but such must be grounded on petitions of bias as provided for by sections 591-604 of the Cameroon Criminal Procedure Code.

The Eseme and Kohtem cases were isolated cases of suspected political assassinations that fell to be determined by the ordinary courts under the simple rubric of murder. There was no wide spread action and no recusal petitions against the regular courts. The special mechanisms were legally unjustified, but given the status of the suspects as key politicians, it is argued that these measures were politically motivated with a view to adversely affect the justice outcomes in these cases.

Predominance of regular law and equality of all before the ordinary courts are the benchmarks of rule of law. Crimes must be capable of objective determination and the institutional design of a judiciary must operate to ensure a fair, rational and predictable application of laws. These special measures therefore reflected the differential application of law, and create a perception of impunity for political killings and related crimes in Cameroon, but also that regularly constituted courts cannot deal with this category of cases. This sense of impunity undermines the rule of law and demonstrates that political killings present a peculiar challenge to the administration of criminal justice in Cameroon.

While justice is a fundamental human value and a central component of the criminal justice system in Cameroon, for victims of political killings and related violence, justice appears to remain elusive.

About the Author:
Emmanuel A. Nkea is a Barrister of the Cameroon Bar, a Judge Emeritus of the High Courts and Gambia Court of Appeal and Partner at SCP Security Law Firm, Tiko Cameroon with a passion for the rule of law.