← Eritrea: Not the country we struggled for
In pursuit of Social Justice →

It is time to take maternal mortality in Kenya seriously

Maternal mortality rates reflect disparities between wealthy and poor women, and between developed and developing countries. [i] Frequently, whether women survive pregnancy and childbirth is related to their social, economic and cultural status. The poorer and more marginalized a woman is, the greater her risk of death. [ii] Ninety–nine per cent (99%) of maternal deaths occur in developing countries, and most of these deaths are preventable. [iii] 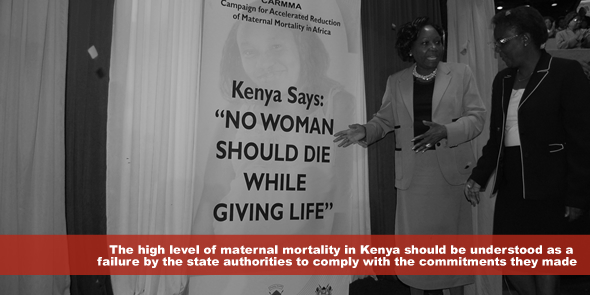 Certainly the high level of maternal mortality in Kenya is not related to the lack of legal protection, or discriminatory laws, the lack of national organs, which should address the problem, or lack of information about the high levels of maternal mortality. On the contrary, Kenya has a progressive Constitution, which entered into force in 2010 and recognizes and protects women’s rights, including reproductive health care (article 43); and Kenya has ratified international human rights treaties both at the universal and regional level, which form part of the laws of Kenya. [viii] Those international treaties protect the right to health, sexual and reproductive rights and women’s rights. Kenya is a member state of the African Union and the African Human Rights system. Furthermore, Kenya has campaigned for reduction of maternal death (such as ‘Campaign beyond Zero’), [ix] and it has two constitutional Commissions with the functions to promote and protect women rights, namely the Kenya National Commission on Human Rights (KNCHR), and the National Gender Equality Commission (NGEC), which have published several reports that mention the problem of maternal mortality, and have also proposed solutions.

Several structural factors – cultural, economic, social etc. – could explain the high rates of maternal death in Kenya, but the question is also who is accountable for not being able to end this tragedy. The persistence of the high level of maternal mortality in Kenya in the new millennium should be understood as a failure by the state authorities to comply with the commitments they made under the Cairo International Conference on Population and Development (1994), the Beijing Declaration (1995), and under the Kenyan Constitution. Consequently, authorities should be accountable for each woman who died due to maternity services and for the implications that those deaths have in society. As has been mentioned by scholars, it is not just the loss of women’s lives that is the outcome of a failure by states to provide access to safe maternal services. With each maternal death, there are also social and economic implications for the newborns, families as well as wider community levels. [x]

Meanwhile, already twenty years have passed since the Cairo Conference took place. Today it is important to identify and develop new strategies to hold authorities accountable for preventable maternal deaths. In thinking about how international law could help to hold states accountable, it would be relevant to use the African human rights framework more intensively, to identify the rights which have been violated by the state’s failure to respect, protect and fulfil women’s rights to safe motherhood, including the rights to life, health, non-discrimination and equality, and information, and to seek that Kenya be held responsible for preventable maternal deaths. In that regard, inspiration could be drawn from a 2011 decision of the Committee on the Elimination of All Discrimination Against Women. In this decision, Brazil was found responsible by the Committee for breaching its obligations under the Convention on the Elimination of All Forms of Discrimination Against Women (CEDAW) for the preventable maternal death of a 28 year-old woman for a lack of provision of appropriate health care to treat obstetric complications related to pregnancy. It is the first time that a UN treaty body conceptualized and applied accountability for preventable death in justiciable terms. [xi] It is to be hoped that the decision concerning Brazil will promote better understanding of accountability due to maternal deaths. This is a landmark decision that could open new pathways for African NGOs and lawyers to find strategies to influence Kenyan authorities to take women’s lives more seriously, and even to bring similar cases before the monitoring bodies under the African Charter on Human and Peoples’ Rights.

[vi] The United Nations’ fifth Millennium Development Goal (MDG 5) aims to improve maternal health to give impetus to country efforts to stem the tide of maternal morbidity and mortality. Target 5A of MDG 5 aims at reducing MMR by 75% between 1990 and 2015, which would require an annual decline of at least 5.5%. Target 5B requires countries to achieve universal access to reproductive health services by 2015. See, United Nations: Millennium Declaration. New York: UN 2000.

About the Author:
Clara Burbano-Herrera, PhD in Law (Ghent University), LLM (Universidad Carlos III de Madrid), Postgraduate Degree in Constitutional Law (Universidad Nacional de Colombia, Bogota), Master in Law (Universidad de los Andes, Bogota), is a Fulbright Postdoctoral Research Fellow at the FXB Center for Health and Human Rights, Harvard University (USA). Before joining the Center, Clara was co-lecturer and postdoctoral research fellow at the Human Rights Centre at Ghent University and at the Flanders Research Foundation in Belgium. Her research interests are the European, Inter-American and African systems of human rights, and interim measures in international human rights law. With her research she won the ‘Prince Bernhard Price for Innovative Research’ (The Hague, 2008) and has twice been awarded the ‘Prize for Academic Merit’ of the Lucía Patiño Osorio Foundation (Bogota, 2000-2001). With her current research at the FXB Center she aims to build strategies, which, from an international human rights perspective, contribute to reduce maternal deaths in Kenya.