How biometric identification can help the judicial management system

In many developing countries in Asia and Africa, the judicial system is yet to catch up with the perpetrators of crimes. The time has come for the respective authorities to change this notion and prepare themselves to adopt cutting-edge technologies like biometrics to accelerate the pace of the judiciary process. They have to remember the saying ‘justice delayed is justice denied’.

In developing countries people have a stereotypical view about judicial systems being slow, rigid, and secretive. This impression exists largely because of the slow judicial process and corruption within the system due to unavailability of modern age technologies to establish accountability of judicial personnel. On the other hand, since there is no effective system for keeping track of day-to-day judicial activities or cross-checking with previous case histories, problems like suspect identity theft and the use of stock witness are frequently taking place. Biometric identification technology can help to establish more accurate and secure identification and thus help the judicial system become more efficient, fast, responsible, and user-friendly. 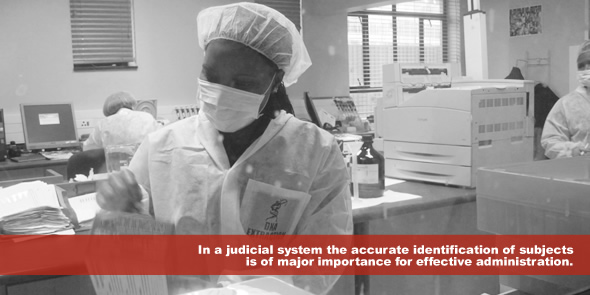 Many developed countries are already using biometric evidence to identify criminals following crime investigations. Based on this use, biometric technology can aid the judicial system in many ways. Let’s take a quick look at some examples of how biometric identification helped some judiciary systems to establish more trust and run more efficiently:

Proving the relation to the crime:
Lee Burgess, 41, was charged with conspiracy to supply drugs earlier in 2014 in Liverpool Crown Court, UK. After the first trial in June jurors could not decide his guilt due to lack of evidence. Later in November 2014 after a second trial he was convicted when his fingerprints were found on wraps of cocaine bought by a policeman posing as a drug addict.

Previous criminal history check:
Marcelo Marquez, a Utah man who was charged with killing two sheriff’s deputies and wounding two other people in a bloody chase through Northern California was arrested in 2014. After his arrest the local authority ran a biometric based background check and it appeared that he was twice deported by the immigration authorities in 1997 and 2001 from the United States, but he has since been living quietly for a decade.

As mentioned earlier, law enforcement agency forensic departments normally store all biometric crime scene information in a centralised database. This database contains the biometric templates of people who have a proven or suspected criminal background. If a judicial system is also connected to this system, every accused person can be easily checked for a criminal history.

Relationship proof:
One of the biggest news stories of 1998 was the trial of Bill Clinton, the US president who was accused of having inappropriate relationship with Monica Lewinsky. When Clinton was asked for a blood sample for DNA testing, he confessed and acknowledged “inappropriate intimate contact” with Lewinsky.

Having DNA biometric testing capability can help the judicial system to solve disputes that involves proving a biological relationship.

Some other important ways biometric identification can help judicial systems are:

How can biometric identification technology be implemented?

In order to enable judicial biometric identification these three things needs to be implemented:

As technologies evolve, so do crime patterns and perpetrators intent on fooling a judicial system. If there is one thing that does not change over time and remains unique, that is our biometric attributes. So there is a pretty good chance that, having the capability of using biometric identification in judicial systems can increase efficiency and effectiveness and minimize the number of criminal incidents.

About the Author: Mohammad Shahnewaz leads the digital marketing team at M2SYS Technology and is an occasional blogger. He is passionate about writing various government and enterprise biometric identity management technology adoption related topics and the changes it brings on people’s lives.