← A true glimmer of hope or a mere mirage? Term and age limits in the ‘new’ Ethiopia
I do not agree with what [Malema has] to say but I will defend to the death [his] right to say it – Voltaire →

The Illusion of the Ugandan Constitution

For the past few years, it has been my privilege to teach Constitutional Law at Makerere, the nation’s oldest University. As it is a first year course, I am one of the first teachers who meet with the young impressionable minds that are similarly privileged to gain admission to the law programme. In the course of class discussions, it quickly becomes obvious that even these fresh minds are cynical about the state of constitutionalism in our country, an impression that is only made stronger when we begin to delve into the text and the promise of the 1995 constitution and to compare this not only with our Constitutional history but with the present reality of how the country is being governed. I try as much as possible in these discussions to refrain from infusing my own views into these debates, my intention being to demonstrate the method of constitutional argument and to encourage critical thinking and reflection rather than suggest that there is a ‘right’ answer – which indeed, many times, there is not. This is often frustrating for the students whose constant refrain is: ‘But what is your view?’

Well, as Uganda prepares to celebrate fifty years of ‘independence’ from British colonial rule, I think it is perhaps about time I did express a view – in a public forum and to a public audience in the hope that it will generate much needed reflection and debate in the wake of this important milestone. In my view, having regard to the constitutional, political and legal history of our country, I think it is fair to say that the 1995 Constitution is essentially an illusion. The illusion begins right from the first article which rather leads us to believe that ‘[a]ll power belongs to the people who shall exercise their sovereignty in accordance with this Constitution’ and runs on until the very last provision of that document. The simple and unadulterated truth is that for a long time in our history, this has not been the case – and it is certainly not the case at present. If one asked the Ugandan citizen on the Kampala street where the power lies, I believe the answer would be that ‘all power belongs to the President, who exercises his sovereignty through the army’. This is both the over-arching and omnipresent truth of our constitutional age, and also the source of the big lie that underlies the 1995 ‘Constitution’. For it is the gun and the capacity for, and ever present threat of, the use of military force by the executive that currently overshadows the parliament and the judiciary and creates the façade of democracy within which raw and unmitigated political power is exercised by an increasingly narrow group of people.

Of course, occasionally this truth has manifested itself for all to see. In retrospect, it was not insignificant that, on the occasion of his swearing in as President of Uganda in 1986, President Museveni evidently did not find the time to change from military fatigues into civilian clothing. Indeed, it now bears recalling that the ‘fundamental change’ speech was delivered by a soldier in full military gear, surrounded by soldiers, in city that had been recently ‘captured’. The very name of the young President ‘Museveni’ itself spoke to a military genesis, he being named after the famous Seventh Regiment of the King’s African Rifles (KAR) – the Abaseveni, who had fought in World War II. The young President was by his own admission a student of the gun, whose undergraduate dissertation was titled ‘Fanon’s Theory on Violence: Its Verification in Liberated Mozambique’ and who, true to form, had ‘interned’ in the battle fields of Mozambique among others. In a recent book by Major John Kazoora, a part of the group that ‘captured’ Kampala in 1986, we are informed that on 28 June 1980, in the heat of the ill-fated political campaign that triggered the bush war, Museveni informed the public that he was not a professional soldier but an armed politician and further that the gun should be an instrument of politics but that it should not command politics. More pointedly, we are informed that he told the audience that ‘[i]f you look into my history you will be able to predict my future’. And so then, continuing to look into the history of the man whose presence now permeates all political discourse in the country, it is evident that while in 1980 he may only have been an armed politician, by 1986 he was definitely a professional soldier. In the same token, while he may have used the gun only to ‘right’ the political wrongs of the 1980 election, by 1986 at least and without doubt today, the gun definitely commands our politics. 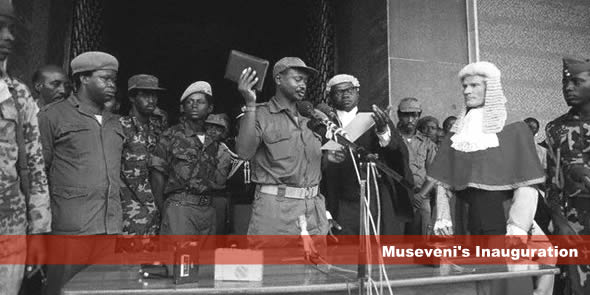 Thus when the Constitution continues to say in its very first article that ‘all authority in the State emanates from the people of Uganda’ and that ‘[a]ll power and authority of Government and its organs derive from this Constitution, which in turn derives its authority from the people’, to the Ugandan citizen on the Kampala street referenced above, this is high sounding nonsense. For we know, and indeed are on occasion reminded, that all authority in contemporary Uganda is vested in the President, who in turn derives his power and authority from the National Resistance Army or, as it now calls itself, the ‘Uganda Peoples’ Defence Forces’. In June 2004 the judiciary was forcefully reminded of this when, after the Court of Appeal forgot its place in this ‘democracy’ and declared invalid the Referendum (Political Systems) Act of 2000, an angry Museveni informed them and the nation at large that the ‘major work for the judges is to settle chicken and goat theft cases but not determining the country’s destiny (sic)’. However the final and decisive indignity for the judiciary came on 1 March 2007 when, in response to the granting of bail to suspected rebels of the Peoples’ Redemption Army (PRA), a group of armed paramilitary men fittingly called the ‘black mamba’ surrounded the High Court, marched into the premises and even tried to forcefully enter the Registrar’s office to ensure that the suspects remained behind bars. We were further reminded of this ‘command of the gun’ when later that year, in August 2007, referring to the 1996 elections, President Museveni told the long suffering people of Luweero that ‘Had you elected Ssemogerere we would have gone to the bush. What else should we have done?’ In terms of the ‘Parliament’, for the first time in our country’s history the army is recognised as an important group requiring special representation in the House. More importantly, Parliament has itself been consistently reminded of its uselessness, with the President at one point saying he did not mind if National Resistance Movement (NRM) MPs slept in the House as long as they woke up once in a while to vote along the party lines. More recently, in an outstanding and blatantly sexist attack on the person of the Speaker, Rebecca Kadaga, the President was quoted as saying ‘[a] speaker isn’t supposed to be in dance halls, jumping up and down. A speaker should wear her wig and keep silent until something that needs her guidance comes up’. This is the President’s past and present style of governance, which is available to us as a guide to predict what we can expect going forward.

Now, it could be argued, and many have done so elsewhere, that these are merely instances of disrespect of the Constitution. However, to my mind, the means by which the present NRM acquired power and the means by which they have sustained themselves in power militates against this view. It would appear that the Constitution does not, in fact, have the supremacy it claims for itself. It is not the ultimate source of power or authority in contemporary Uganda, but merely one of the tools by which the NRM’s stranglehold on power is consolidated and perpetuated. In effect, the Constitution and a number of other laws have become mere instruments of politics to be used and abused as the political expedience demands. In such a situation, I do not think it is accurate to say the Constitution has been violated – the Constitution itself is naked, impotent and illusory. The gun is the real source of power and authority in contemporary Uganda. All power belongs to the President Museveni, who exercises this power through the armed forces. Article 1 of the Constitution is a lie – and the Constitution in Museveni’s Uganda is an elaborate farce that is cynically perpetrated by the President to consolidate and extend his hold on power. This is one of the great tragedies and challenges of ‘Uganda at Fifty’ and one that promises to engender more turbulent chapters in our political life.

About the Author:
Busingye Kabumba is Lecturer-in-Law at the Human Rights and Peace Centre (HURIPEC), a department of the Faculty of Law, Makerere University and Consulting Partner with M/s Development Law Associates. He has taught Constitutional Law and International Law at graduate and undergraduate levels. He is also an Advocate of the Supreme Court of Uganda and all subordinate courts thereto. He holds the degrees LL.B (Makerere), BCL (Oxford), LLM (Harvard) as well as a Post Graduate Diploma in Legal Practice from the Law Development Centre, Kampala.

19 Comments on “The Illusion of the Ugandan Constitution”