The author critically reflects on the African Union Commission on International Law (AUCIL) statute of 2009 particularly in relation to its mandate to advance the teaching and development of international law in Africa; examines its relationship with proposed African Union Institute of International Law (AIIL) in Arusha, Tanzania; and calls for an amendment of the AUCIL Statute in order to enhance the achievement of its goals and clarification of some vague areas.

Historically, the discourse in relation to the role of Africa in the development of international law, especially as a contributor or shaper, can be argued was popularised by the works of the late Taslim Olawale Elias who has been criticised in turn by some scholars for his glorification of Africa. The view that Africa contributes and shapes the development of international law arguably inspires the provisions of Article 6(1) of the AUCIL Statute (Codification of International Law) which mandates the AUCIL to codify such aspects of the rules of international law where “there has been extensive State practice, precedent and doctrine in the African continent.” Following suggestions by African international law scholars such as Muna Ndulo for curriculum revisions to include directed teaching on various subjects in relation to Africa and international law, it is encouraging to see that the African Union (AU) has taken a practical step in broaching the question of partnership in the teaching and studying of international law as it concerns the AU with universities and international institutes in Africa under the auspices of the AUCIL. It is hoped that the current effort which has witnessed a worrisome delay in taking off after three years of the adoption of the AUCIL establishing statute is more than a mere rhetoric.

As part of its functions, the AUCIL is to enhance the progressive development of international law in Africa. In addition to other objectives, the AUCIL is established to encourage the “teaching, study, publication and dissemination of literature on international law, in particular laws of the Union with a view to promoting acceptance of and respect for the principles of international law …” (emphasis mine). Article 5(1) of the Statute places an obligation on the AUCIL to identify and prepare draft instruments and studies in areas which have not yet been regulated by international law in Africa or been sufficiently developed in the practice of African States. To assist in the actualisation of this objective, Article 9 mandates the AUCIL to “co-operate with universities, institutions and other educational and research centres as well as with bar associations and other associations of lawyers” in the teaching of international law and African Union law. Neither the AUCIL Statute nor the Rules of Procedure of the AUCIL (AUCIL/Legal/Doc.4 (III) made pursuant to Article 19 of the AUCIL Statute which creates the organisational structure of the AUCIL provide any guidance on the modus operandi for such co-operation. In my view, due to the educationally oriented nature of the objectives of the AUCIL, it is important for the AUCIL to propose a regulation to the Assembly of the Heads of State and Government of the AU (Assembly) which details the procedure not only for approaching the AUCIL by supposed partner institutions, but also setting out the standards and guidelines for the curriculum. This regulation should also serve as an opportunity to clarify some vague terms in the statute such as the phrases “International and African Union Law” and “laws of the Union” which are not defined. 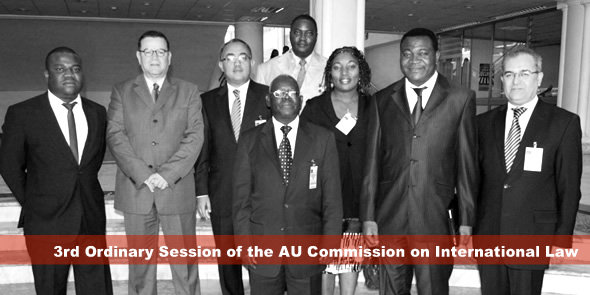 How does the foregoing relate to the AIIL? The proposal for the establishment of the AIIL was made by the Republic of Tanzania to the AU and the Decision to proceed with its establishment and to report progress thereon to the Assembly in July 2012 was made vide Assembly/AU/14(XVIII) Add. 5 in January 2012. Based on the available materials from the AU website, it is not apparent that any reference was made to the provisions of the AUCIL Statute by the proposed AIIL in approaching the Assembly. Notwithstanding that, I argue based on that, objects of the AIIL, that its establishment purports to take advantage of the provisions of Article 9 of the AUCIL Treaty on partnership in relation to the study and teaching international law in relation to the AU. In proposing its amendments, the AUCIL can draw some inspiration from the elaborate list of subject areas that the AIIL has proposed to develop and teach in partnership with associated faculties of law in selected African universities. It is also high time the AUCIL started taking positive steps to actualise the vision of the organisation and one hopes that by July there would be some progress report to the Assembly on the AIIL.