← Stifling democracy – the Museveni way!
Biko and the right to happiness →

Constitutional jurisdiction and the right to happiness

Should it be a role of the Judiciary to assure happiness for the people? Is it appropriate for a Constitutional Court to consider happiness to be a right? Does the establishment of fundamental rights expand the collective happiness? To answer these questions, it is essential to examine the root of Constitutional jurisdiction.

Karl Loewenstein questioned whether the Constitution would be “instrumental for the pursuit of happiness of the people”,[1] based on his intrigue into the purpose and meaning of a Constitution. He is accompanied by Hans Kelsen, for whom “the longing for justice is man’s eternal longing for happiness”.[2]

The answer to the aforementioned questions lies within the examination of the Constitution of the State of Pennsylvania, in the United States, in 1776, in order to address the power given to the courts to assess the constitutionality of the laws and of normative acts. 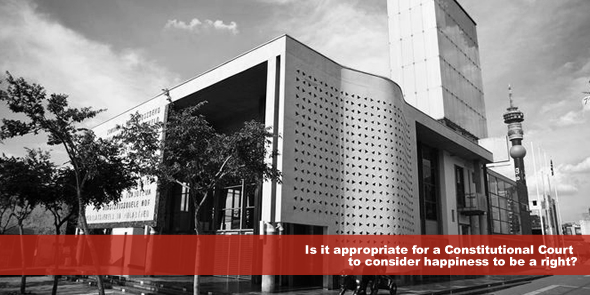 Section 47 of Chapter II disciplines the choice of the ‘Council of Censors’ which has the duty of ‘examining whether the Constitution was preserved in all of its parts without any single damage’ … ‘if the responsible bodies of the Legislative and Executive Branches fulfilled their functions as guardians of the people, or if they appropriated or exercised any other or greater rights than those that were granted to them by the Constitution’.[3]

The genesis of the concept of the fundamental right to happiness stems from the provision for the calling, by the Council of Censors, of an extraordinary commission whenever ‘it appears to them that there is the absolute need to correct any defective article of the Constitution, to explain any one of them that had not been expressed clearly or to add articles that could be necessary for preservation of the rights and of the “happiness” of the people’.[4]

To aspire to happiness as a goal requires a strong commitment by the group whose mission is to maintain this ideal. Joshua Greene illustrates this with an example of the ‘Northerners’, the ‘Southerners’ and the ‘great Elders’.

Greene states that ‘short of a dramatic cultural shift, collectivism will always seem wrong to the Northerners, and individualism will always seem wrong to the Southerner, no matter how the facts turn out’. The fact is that ‘both sides truly believe that their respective ways of life produce the best results. However – and this is the crucial point – both sides are more committed to their ways of life than they are to producing good result’. Greene continues to illustrate that ‘the great Elders understand this. They are the guardians of the local wisdom, and they know better than to take our hypothetical bait. They understand that their values are not, at bottom, about “whatever works”. They aspire to live by deeper moral truths’.[5]

It is interesting to note that Greene uses the term ‘guardians of the local wisdom’ in relation to the purpose of ‘the great Elders’. Taking into account the fact that the Constitutions appoint the Supreme Court and the Constitutional Courts as the guardians of the Constitution and, furthermore, that experience is a pre-requisite to being appointed as a judge, it would not be an exaggeration to visualize the Constitutional Courts around the world as a new type of ‘great Elders’. Greene’s illustration concludes that ‘from a utilitarian perspective, a good decision-making system is one in which the decision makers are more likely than otherwise to make decisions that produce good results’.[6]

Happiness is a fundamental aspiration. People try to escape from what is painful and guide their decisions based on their pursuit of happiness. There are many connections between constitutional rights and happiness. Richard Layard, Director of the Centre for Economic Performance at the London School of Economics, affirms that “the constitution and laws we live with are crucial to our happiness. They are to be justified by the Greatest Happiness principle, but once established they should not normally be broken, even if that would sometimes produce more happiness in the short run”. Layard continues to argue that “any human right has to be justified as a way of preventing suffering (or promoting happiness)”.[7]

The appeal of happiness is easily understandable. It is a neutral value able to provide rights to a nation’s people. Happiness works as a channel through which people can try to fulfil their deepest needs. Joshua Greene explains that “one’s happiness is the overall quality of one’s experience; and to value happiness is to value everything that improves the quality of experience, for oneself and for others – and especially for others whose lives leave much room for improvement”.[8]

A Constitution is, above all, a set of fundamental principles established by a generation of a country, in respect to themselves, and to the following generations. From time to time, the future generation, by seeing that it has deviated from the pathway, has the opportunity to remember the foundation agreement and, in doing so, to change the course of history for its country. Constitutional principles may be seen to function like a time machine inasmuch as we can renew fundamental beliefs which may have been forgotten, and, as such, the society keeps overcoming the challenges faced by a constitutional democracy.

This approach illuminates the concept of the combination of happiness and the utilitarian doctrine, along with debates on constitutional issues, as an erudite way to deal with hard cases which often cause debates.

In Africa, the right to privacy has produced a debate on the issue of utilizing a utilitarian approach to deal with its particularities. Dominic Dagbanja explains that, with regard to the right to privacy, ‘our nature as human beings and our well-being and happiness as such, in some respects, would be better promoted if we are left alone’.[9]

Scholars are starting to analyze the courts’ approaches being used in terms of the application of the utilitarian doctrine to the right to happiness and its facets, especially as they are being applied in the Constitutional Court of South Africa. Gerhard Van Der Schyff discusses decisions dealing with the Constitutional aspects of the use of cannabis for religious purposes in South Africa.[10] For him, ‘the Bill of Rights should be an instrument that facilitates and guards the search for personal truth, values and/or happiness’.[11]

This leads to the necessary discussion of happiness as a Constitutionally protected right, endowed with normative density.

The Community Law Centre (UWC) and the Centre on Housing Rights and Eviction (COHRE), working as amicus curiae of the Residents of Joe Slovo Community v. Thubelisha Homes case[12], presented before the Constitutional Court of South Africa an appealing argument: people should not be evicted from their homes; they should stay there, despite the previous Court’s decision ordering the contrary. They were happy there, and they were living in dignified conditions. At this point, they cited a survey supporting their affirmation: ‘68% of the households surveyed were unhappy with the move to Delft. The main reason for their unhappiness was the transport problem. The DAG found that a further reason for unhappiness in Delft was “that people had lived in Langa for a long time and had social networks there”’.[13]

Regardless not explicitly stating core of this argument in its decision, the Constitutional Court prevented the government from proceeding with the eviction and consequent relocation. If the people are living in a dignified condition, they can stay where they feel themselves happy, even if the highest court of the land has to overturn its previous order in this respect. In other words, the people’s happiness matters.

In a case where a precise reading of the provision relative to the children was necessary, De Vos J explained that ‘custody of children involve day to day decisions and also decisions of longer and more permanent duration involving their education, training, religious upbringing, freedom of association, and generally the determination of how best to ensure their good health, welfare, and happiness’.[14]

This phenomenon requires the appropriate theoretical treatment. We are talking about an important facet of  the constitutional field that seems to be spreading globally. What must be done, instead of denying what is evident, is insisting on studying the possible density and contours of happiness as a fundamental right, providing a space for an erudite and contemporary debate about its merit as a fundamental right.

This is the second article in a series by Saul Leal.

[1] AJ Zurcher Constitutions and Constitutional Trends since World War II: An Examination of Significant of Postwar Public Law with Particular Reference to the Constitutions of Western Europe (1951) 191.

[3] The Constitution of Pennsylvania also states that ‘the legislature, therefore, had no authority to make an act divesting one citizen of his freehold, and vesting it in another, without just compensation. It is inconsistent with the principles of reason, justice and moral rectitude; it is incompatible with the comfort, peace and happiness of mankind; it is contrary to the principles of social alliance in every free government; and lastly, it is contrary both to the letter and spirit of the Constitution’.

7 Comments on “Constitutional jurisdiction and the right to happiness”