← The right to education: Children with disabilities in The Gambia
Sentencing ‘at the president’s pleasure’ and what it means to persons with mental disabilities in Kenya →

In the absence of democratic principles, tyranny reigns

“You may choose to look the other way but you can never say again that you did not know.” – William Wilberforce​

When the world celebrated the International Day of Democracy (15 September 2014), I reminded myself of some of the key tenets of democracy, namely: free and fair elections, the rule of law, the upholding of fundamental rights and freedoms — to name but a few. The mention of the rule of law in particular raised red flags in my mind as I pondered where to place Eritrea when choosing between definitions of democracy and autocracy.

The rule of law and the respect for human rights stand as prerequisites to realising democratic statehood. The laws which govern a state are enshrined in a constitution; a constitution sets the parameters for lines that cannot be crossed; the principles by which a state should conduct itself. Where then does one begin to place or reference these barriers in a country with no constitution? Who has legitimacy in decision-making? What legal standards are used? The lines continue to blur… 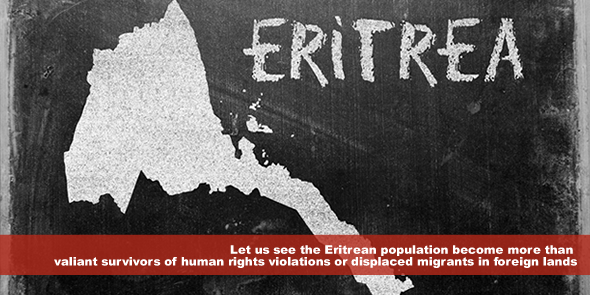 “Hopes were high that with the liberation of the country in 1991 a new chapter would be open that would see the promotion of peace, justice and democracy. Unfortunately, these three words have disappeared beyond recognition and the demand for their implementation is now considered a crime subject to severe punishment, indefinite incarceration or death”. (Eritrean Activist)

Eritrea’s constitution — written in 1997 — remains unimplemented. The result? No separation of powers between the legislative, judicial and executive branches of state exists; all checks and balances expected in a democratic state do not exist. Compulsory and indefinite conscription is an ingenious means of controlling the economy, whilst simultaneously allowing impunity for the use of forced labour, sexual abuse or torture during military service, knowing that criminal justice will never prevail.

Concepts such as freedom of expression exists only in theory, not exercised since the 2001 ‘Crackdown’ when private media was closed, journalists forced into exile and many were imprisoned for their opinions. Try and exercise your freedom of expression and you will be held incommunicado for indefinite period in some of the harshest prison conditions known to humankind. The day 18 September 2014 marked the thirteenth year since those arrested during the ‘Crackdown’ disappeared. To this day their whereabouts remain a subject of conjecture, except for their jailers, no one for certain knows where they are and who is dead or alive. I have not yet mentioned the restrictions to movement, religious expression, or opposition to government. What we see is a vigorous endeavour to break the human spirit in order to rule with an iron first. This is no democracy.

“Given the continuous crimes committed by the regime against innocent Eritrean citizens and political ‘dissidents’, it is highly unlikely that they would entertain any chances of opening up for democratisation and rule of law in the country”. (Eritrean Activist)

It is painfully perplexing to be able to list — just at the top of my head — some of the tools needed to immediately move Eritrea onto a more democratic path, and not see them realised. To begin with, implement the constitution, set the boundaries of power — use them — then align them with standards and conventions created to guide states in the realisation of democratic leadership. Rely on the instruments such as the African Charter on Democracy, Elections and Governance — a charter rooted in promoting and advancing constitutional order, legitimately elected authority, and the respect for human rights as supreme.

It is undisputed that the rule of law abandoned will produce an oppressed population. It is therefore vital that Eritrea restores national pride by empowering its society instead of enslaving them in the context of indefinite national service. Empower a society that is not only knowledgeable of but can practice its rights and where prisons do not hold scores of political prisoners but actual criminals who are themselves convicted in courts that are truly independent and fair. Let us see the Eritrean population become more than valiant survivors of human rights violations or displaced migrants in foreign lands who have lost hope in their country’s ability to respect their dignity.

About the Author:
Thato Motaung is a researcher in the fields of gender, peace and security and human rights on the African continent. Prior to working for the Centre, she was a Research Fellow to the African Union Commission, Bureau of the Chairperson in Addis Ababa, Ethiopia. She holds a Master of Science in European Studies: Transnational and Global Perspectives from the K.U. Leuven in Belgium, and a Bachelor of Science in Political Studies & Industrial and Economic Sociology from Rhodes University, Grahamstown.

3 Comments on “In the absence of democratic principles, tyranny reigns”